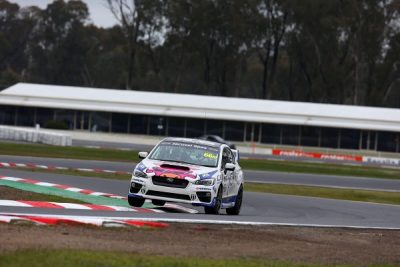 Dimitri Agathos and Lachlan Gibbons have driven the FullGas Racing Subaru WRX STI to its best results of the 2018 season, finishing sixth and fifth in the pair of races at Winton for Round 3 of the Australian Production Car Series.

It was a satisfying result for the Western Sydney outfit, following the extensive repairs to the Nova Employment/Castrol/Whiteline/All Drive Subaroo/Hog’s Breath Café North Parramatta machine after its crash at Queensland Raceway.

Agathos and Gibbons were among the fastest drivers during Friday practice, held in wet weather conditions. The circuit dried on Saturday, Agathos qualifying a still-respectable seventh.

In Race 1, Agathos steadily worked his way up to sixth position by lap 18 – a place he held through to the chequered flag.

Lachlan Gibbons was handed driving duties for Race 2, and some assertive moves on the opening lap saw him running as high as third before he was re-passed by some of the more powerful cars.

After running sixth for much of the race, a late move on the BMW M3 of Beric Lynton/Tim Leahey enabled him to score a top-five finish.

“This is a rewarding result for the team after all the hard work to get back on track this weekend, the car ran faultlessly and we achieved the best-possible result for our speed,” Agathos said.

“Realistically, we were still down on straight-line speed compared to some of the other Class A1 cars, but our times were consistent in both races and we saved some time by doing one complete race each, and not swapping drivers during the pit stops.

“A big thank you to some of the people who helped us be on the track this weekend – we couldn’t have accomplished our results without the help of Jonny at Autotow and Gainsford Body Repairs and the Niazi and the team at All Drive Subaroo.”

“At the start of my race, a few opportunities presented themselves and I decided to have a crack,” Gibbons said.

“Overall, it was a good weekend – our straight-line performance deficit wasn’t as much of an issue as at some of the other circuits, and Dimitri and I both drove our very best.”

The next round of the Australian Production Car Series will be held at Sydney Motorsport Park, 21-23 September.