FullGas Racing Fully Armed for “Fight in the Night”

FullGas Racing Fully Armed for “Fight in the Night” 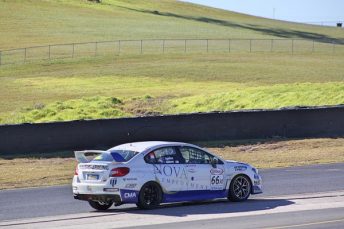 A comprehensive engine rebuild and some suspension developments are giving FullGas Racing drivers Dimitri Agathos and Lachlan Gibbons renewed confidence ahead of Round 4 of the Australian Production Car Series at Queensland Raceway – featuring the spectacular “Fight in the Night” – this weekend.

Since the last round at Sydney Motorsport Park, the Nova Employment/Castrol/Whiteline/Hog’s Breath Café North Parramatta & Castle Hill Subaru WRX STI has undergone some intensive maintenance and both drivers are optimistic of improved performance.

“The engine has been totally rebuilt by All Drive Subaroo – it has forged pistons, which will give us increased power while also improving the reliability,” Agathos said.

“We also learned a lot about the suspension setup at the SMP round, and we’ve made some more changes which should make it well suited to Queensland Raceway.”

The weekend will consist of two 300km races – the first will be held in the dark on Saturday evening, with the second to be staged on Sunday afternoon.

The “Fight in the Night” has become a popular fixture on the production car calendar since its introduction in 2012, and it will be the first night race for both Agathos and Gibbons.

“Watching footage of last year’s night race made me decide it was something I really wanted to do,” Gibbons said.

“The cars just look so spectacular with the lights and brakes glowing, and it’s also a good opportunity to learn how to race in the dark – there aren’t many night races in Australia.”

A healthy 26-car grid has entered the event, and Agathos said traffic management will be important.

“All the cars are going to have strengths and weaknesses in different parts of the track,” Agathos said.

“Some of the Class A2 cars will be quicker on the straights than us, but we should have an advantage in the corners.”

“It’s really good for the category to have such a strong field, and having drivers like Chaz Mostert and Todd Hazelwood helps with exposure – I’m looking forward to racing against them,” Gibbons added.