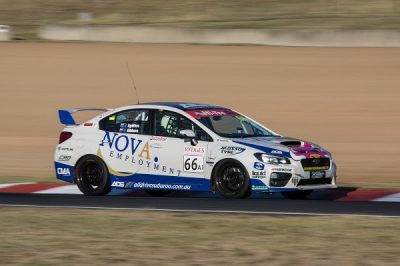 FullGas Racing drivers Dimitri Agathos and Lachlan Gibbons are confident the team’s Subaru WRX STI will be back to its best at this weekend’s third round of the Australian Production Car Series at Winton.

The car was crashed heavily in the previous round of the series at Queensland Raceway, necessitating a mammoth rebuild program.

“Because the impact was on the left-front corner, the whole front end of the car was pushed out of alignment,” Agathos said.

“Thankfully, it wasn’t a complete re-shell but the damage was extensive – we had to cut the front off another car. The front rails, left-hand doors and guards all had to be replaced – fortunately, we had the support of Gainsford Body Repairs in the panel and chassis repair work.

“The engine was also damaged in the impact, so a big thank you to All Drive Subaroo for repairing it for us.”

Winton was one of the stronger circuits for FullGas Racing last year, the team recording an outright third-place finish in the Sunday race. Gibbons says the Nova Employment/Castrol/Whiteline/All Drive Subaroo/Hog’s Breath Café North Parramatta Subaru has been developed into a more competitive package since then.

“In the last 12 months, we’ve made a lot of progress with engine development and handling, so we should be quicker than we were last year. In saying that, the level of competition is much tougher as well, so repeating our top-three finish will be a tall order.

“The FullGas crew have worked flat out to get the car ready for this weekend, so hopefully we can deliver a good result for them.

“There is some rain forecast, and we’ve seen in previous events that it definitely works to our advantage – hopefully it pours this weekend!”

The event consists of a pair of two-hour races on Saturday and Sunday.