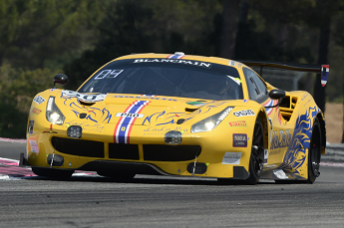 A tough but very competitive Paul Ricard 1000 km ended in frustration for Pasin Lathouras in the #50 AF Corse Ferrari 488 GT3 after a technical problem scuppered his bid for victory just as the endurance race moved into the closing stages.

The 24-year-old Thai driver had started the Paul Ricard 1000 km, the third round of the 2017 Blancpain GT Series Endurance Cup, from the second row of the grid after Pasin and his teammates, Italian’s Michele Rugolo and Alessandro Pier Guidi, posted the third quickest time during the morning’s combined qualifying session.

Pasin was in the yellow Ferrari for the first stint when the massive grid of 58 GT3 cars took the green flag at 1800 local time. It proved a challenging opening stint as Pasin had to deal with several Safety Car periods as well as contact with a competitor Audi which saw him spin and drop to thirty fifth place although he was soon fighting back up the order. Superb strategy engineers which extracted maximum advantage from the Safety Car and full course yellow flag periods meant that when scoring points had looked something of a distant bet they were suddenly up and challenging for the race lead.

As the race wore on the #50 Ferrari was never far away from the hunt for P1, leading the race outright at times and running very comfortably in the podium positions as the non-stop action ebbed and flowed. A high points scoring finish was the primary target from the race although the crew had one eye on victory. The #50 car also had to absorb a mid-race drive-through penalty which the three drivers managed to compensate for superbly.

Problems however struck the #50 Ferrari just minutes before the fifth hour mark passed by and as the race ran into the darkness of a warm and dry late evening in the South of France night. There was in fact just over one hour remaining on the clock when a technical problem slowed the Ferrari to a trundle and as it made its way slowly around the track and back to the pitlane two laps were lost with further time being conceded as the mechanics lifted the engine cover to look inside the bay.

That plunged the #50 car out of the front running action and after a solid fight back over the final hour of the race they took the chequered flag in P23, three laps down.

The next race on Pasin’s schedule will be the fourth round of Blancpain GT Series Endurance Cup 2017, the 24 Hours of Spa, which will be held on 27-30 July.

Pasin Lathouras: “It was a very disappointing end to the race to hit problems so late on, especially after we showed a pace that could get us onto the podium, that could even could have been the top step. The engineers did a fantastic job with the strategy to squeeze gains from the Safety Car periods and other incidents so that they worked out well for us and helped get us back into contention. The car had a very good pace, Michele and Alessandro did a superb job, so now we have to get focused on the 24 Hours of Spa and turn it around and aim for a good result.”