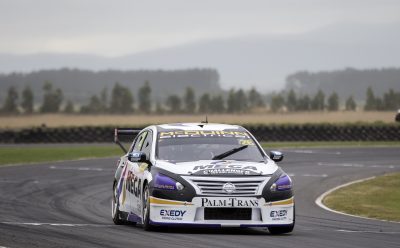 The second round of the Dunlop Super2 Supercars Series for MEGA Racing’s Garry Jacobson looked to be back on track after a third placing in the second race this morning in Tasmania – however the joy was short-lived as he was taken out during the first lap of the final race.

Starting eighth based on combined results from the first two races, a skirmish in front of Jacobson and a hit from behind left him with nowhere to go and he collected the rear of the car in front.

The damage saw Jacobson bring the MEGA Fuels Nissan Altima back to the pits. The MW Motorsport team searched over the car in an effort to get him back on track, however the decision was made to end the race.

Earlier this morning, the Shepparton-based 25-year-old put in a sterling effort from fifth on the grid to finish third.

Conditions at Symmons Plains Raceway started dry, but by the end of the 30 laps early this morning, rain had descended on the racetrack, making for greasy conditions.

After a weekend of incidents not of his fault, Jacobson leaves Tasmania feeling frustrated in seventh position on the Driver’s Championship table, however is looking ahead to the Perth Super Sprint over the weekend of May 4-6 – where he hopes the season troubles are now behind him.

“Today’s second race was good, we went back to our setups from Friday and saw an improved braking performance, so I felt as though the car was back to where we wanted it to be.

“It was unfortunate to get taken out in the third race, as I thought we could have made our way forward. It really compounded what happened yesterday.

“Overall, I think the category needs to address the driving standards, there are guys not giving racing room or re-dressing when they should be, which is resulting in accidents – and I’m not talking about just those involving me – it is quite frustrating.

“Having said that, and putting aside the troubles we’ve had this weekend, I am still in high spirits, there’s a long way to go in this year’s Championship and I can’t wait to get back to Perth in May.”