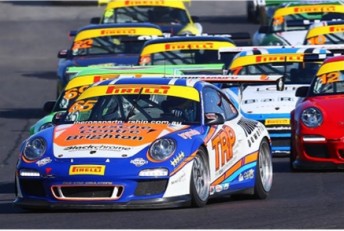 The Swiss made, uniquely Australian watch brand will feature on the #65 FRR Porsche 911 race car for the remainder of the 2014 Porsche GT3 Cup Challenge Australia season.

Two rounds into the six-round 2014 series, 23-year-old racer Fraser Ross currently holds the championship points lead in both the Outright and Class A divisions.

“It’s great to add such a prominent and unique brand to the FRR sponsor portfolio,” said Ross.

“When we’re on track we’re all about racing for the best possible time. I think this is why timepiece sponsorship and motor racing has gone hand in hand for so many decades.

“Bausele Australia has fantastic, premium products and it’s fitting that the brand will be displayed on my Porsche race car in the Porsche GT3 Cup Challenge Australia series.”

Ross will be representing the Pilot Automatic series , best suited for a driver due to its off-centred dial making it easier to read the time while your hands are on the steering wheel.

Bausele Australia Christophe Hoppe is excited about the new partnership and looks forward to the synergies between motor racing and timepieces.

“Fraser is obviously a very talented young driver and also a talented young professional in his business career – all elements that make Fraser a perfect fit for the Bausele Australia brand.

”Being a proudly Australian brand, we are also very glad to support a young Australian athlete making a name for himself in motorsport.”