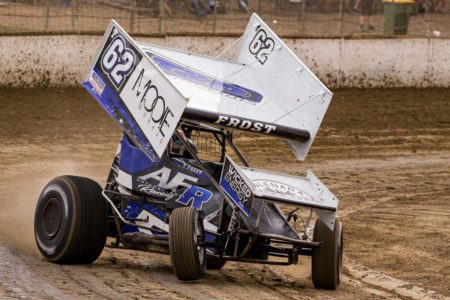 The step into 410 Sprintcars is far from an easy task. For Tasmanian-based teenager Tate Frost, it’s a challenge that he is grabbing with both hands.

Recently completing his second season in 410 Sprintcars, the 18-year-old racer took part in many of the major events, such as selected World Series Sprintcar Championship rounds, the Grand Annual Classic at Warrnambool’s Premier Speedway and the Australian Championship on home soil: Latrobe Speedway, and showed plenty of promise.

With the highs come the lows, but Frost never let the challenges of taking on the country’s best 410 Sprintcar racers get the better of him and he counted it all as part of the learning curve.

“I had some good nights and some bad nights throughout the season but with it all I counted it as valuable experience,” said the pilot of the Tas # 62 Mooie Makeup / Wicked Energy Gum supported Maxim car.

“When you come up against the country’s best racers at the season’s biggest events, you learn so much as a racer, and I’m very grateful for the opportunity to be racing regularly on the mainland and constantly being able to grow as a racer.”

One of the newest additions to the team was crew chief Dave McFadden. The Frost family and McFadden got to know one another late last season during Tate’s first season in 410 Sprintcars through McFadden’s race parts business T&D Wholesale. McFadden’s first night as crew chief came at Latrobe Speedway late last season, when he finished second in the feature race. After that, McFadden hasn’t left the team’s side. Apart from crew chief duties, McFadden houses the team’s car at his Warrnambool-based workshop. At the same time, Frost has gained a mentor in Dave’s son, James McFadden.

“I can’t thank the McFadden family enough for all of their ongoing support and it’s certainly played a huge part in our team’s progress,” commented the Westbury, Tasmania resident, who prior to stepping into Sprintcars had spent five years in Go Karting on the tar circuits around Tasmania, along with three years competing on the Australian Championship trail in the KA2 class.

“James has been a great mentor for me, as he has achieved so much in the sport of Sprintcars and he is the type of person who tells me what I need to hear not what I want to hear. There were times during the season, when his advice played a big part in me being able to turn a tough night into a good night.”

Throughout the season, Frost contested a total of 22 race meetings and managed to bring home a total of 15 feature-race finishes. One of the highlights came at Geelong’s Avalon Raceway in Victoria during the second Eureka Garages & Sheds Series round in October of last year, when he charged from the C main (4th), then the B main (3rd) and ended up sixth in the feature race.

Although the 2019-20 season was brought to a premature end due to the coronavirus, Frost and the team are now looking forward to the 2020-21 season, which is set to begin in September at Murray Bridge Speedway in South Australia. Frost is planning to contest a similar schedule to the one from the season just gone.