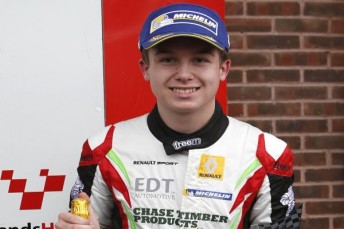 The 17-year-old, from Cranworth in Norfolk, is in his first full season of Clio Cup Series action this year and has so far chalked-up eight wins in the Sport Class – a category for inexperienced first year competitors – with a best overall result of sixth position achieved on four occasions.

Ahead of rounds 12 and 13 at Silverstone on 19th/20th September, Hatfield has opted to make the move to Pyro from Finesse Motorsport and is relishing the prospect of competing with Mark Hunt’s squad for the first time.

“I am delighted to be joining Team Pyro for the season finale at Silverstone”, said Hatfield.

“It’s a fantastic team with a great pedigree in Clios over the years, I’m really looking forward to starting this new chapter in my career with them. It goes without saying, I’d obviously like to thank everyone from Finesse for all of their hard work this year.”

After a five-year tenure in karting, where he was a multiple podium finisher and winner in Comer Cadets, Mini Max and Junior Rotax, Hatfield made his car racing debut in 2013 in the Junior Saloon Car Championship where he achieved one podium from 11 races contested.

Taking a best result of seventh place on his Michelin Clio Cup Race Series bow at Brands Hatch last year, a one-off outing, the Hugh J Boswell and EDT Automotive-backed racer has gone on to be a consistent front-runner in the hugely competitive championship this season.

Welcoming Hatfield to Pyro’s ranks, team principal Mark Hunt commented: “We’ve been speaking to Adam for quite a long time to be fair, hopefully we can help to move him up a bit at Silverstone but the main aim is to get him ready for a full attack on the championship next season. It’ll be good for him to see how we work before this season is over, but it’s mainly about preparation for next year.”

Barwell-based Pyro will also field another third generation Clio at Silverstone for businessman Charlie Fulk (Woking), the 47-year-old set to make a welcome return to the Michelin Clio Cup Race Series having debuted in the category during the 2014 season finale at Croft in North Yorkshire.

Last season’s outing with Pyro marked Fulk’s maiden race in cars, his only previous competitive track experience having been in karting in the early 1990s. Away from motorsport, Fulk is a Director of successful haulage business Goldstar Heathrow.

Along with headline sponsors Michelin and Protyre, the Clio Cup Series is additionally supported by Ferodo, Safety Devices and ALS Performance.