From the ‘B’ to the top three

From the ‘B’ to the top three 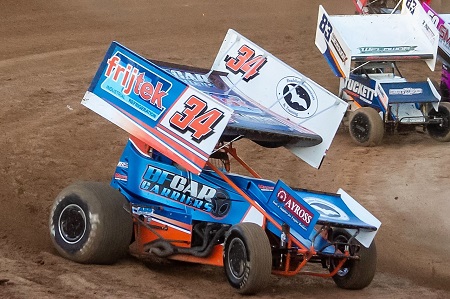 Brenten Farrer began his 2021 Sprintcar season in fine style as he charged to a third placed finish in the Col Beasley Classic at the Timmis Speedway at Mildura, an event that doubled as the opening round of the Australian 360ci Sprintcar Allstars Series.

The night began with a solid qualifying effort that put the #34 Frijtek / Porkers Transport Maxim on the front row and after a great battle with Steven Caruso Brenten went on to secure the heat win. But after dropping his second heat, due to a malfunctioning bleeder valve, Farrer had to make his way into the main event via the Last Chance Qualifier. Brenten went on to win the B Main ahead of Jarman Dalitz to lock in his starting position for the 30 Lap A-Main.

As the green flag fell Farrer had a lot of work to do and at the end of lap 1, he was 15th in the 19-car field. But as the race progressed, he made his way through the field charging into the top 3 with six laps remaining, picking up the bonus money as the “Hard Charger” in the process.

Unfortunately, despite his strong A-Main finish his second heat result proved to be costly in the points chase as he finished the night in 20th position overall in the Allstars points.

“Congratulations to Rusty (Hickman) but I would have loved to be off the front with him. The car had great speed in it but that second heat cost us. My Team gave me a great car and they worked hard all night.

We will now try and follow up our strong run at Mildura by going to Simpson on Saturday night and go for the win. The Challenge has a good field of cars so I’m really looking forward to getting back to a track I usually run well at” commented Brenten following the Mildura event.