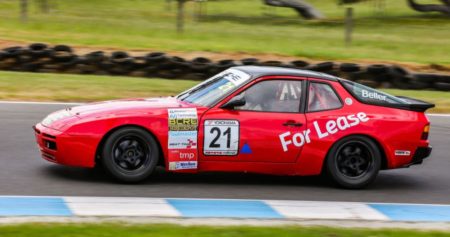 He has won multiple races and championships in the Victorian Porsche 944 Challenge series, but yet has never driven a race car.
Andy Beller has led the Beller Motorsport team to multiple victories over the last 10+ years with son Cameron behind the wheel dominating the category for the past 5 years, but he will finally put down the headset and swap it for a helmet as he takes one of the Beller Motosport Porsche 944’s for a test session this Friday at the famous Winton Motor Raceway.

The test day has been on the cards for many years but has always been pushed aside until now.
“I just don’t want to steal my son’s thunder.” said the team principal while talking to us. “I used to drive my road-going Porsche 928 around Calder Park back in the day, and I would beat all the 911’s – So clearly I’m going to be fast!”

We spoke to Perth-based 944 Challenge competitor Tim Wolfe who has informed us about the prize up for grabs if Andy beats his PB lap time: “Andy is normally on the other side of the headset for me when I race. I had all the flights booked to come and watch him turn his first laps, but unfortunately the recent COVID situation canceled those plans. I told him there will be a case of his favourite Moscato (Andy’s favourite beverage) waiting for him if he can beat my time.”

Although that Moscato is definitely on Andy’s mind, he also has other goals in his sights. “Andrew Jackman and Mark Taubitz will both be there on track too, so I want to show them a few tricks also, but Cam’s lap record is what I’m really looking for!”

We asked Cam for his thoughts about the event coming up: “If he drives as fast as he talks, I might be in trouble! But he is prone to crash into tool-boxes just walking around the pit area, so I’ve just asked him to bring the car home in one piece… I’m not too sure if that got through to him though!”

It looks set to be an interesting day on track tomorrow at Winton raceway as some of the series runners get some last-minute shakedowns in before the 2021 Porsche 944 Challenge series starts next weekend at Sandown Raceway as part of the Victorian State Racing Championships. With 20 944’s entered, and over 300 cars competing over the weekend across all of the categories, it looks set to be a cracking start to State racing in Victoria in 2021!