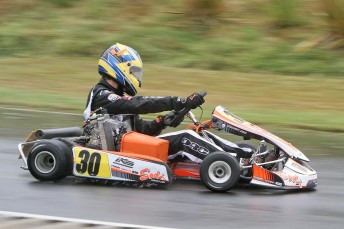 Three freshly-minted New Zealand KartSport champions spearhead the entry at the latest round of this year’s Rotax Max Challenge New Zealand kart series in Hamilton over the weekend.

The round, at the KartSport Hamilton club’s Agrisea Raceway opposite the city’s international airport, is the third of six and comes just under a month after KartSport New Zealand’s annual National Sprint Championship title meeting in Blenheim where Mathew Kinsman and Ryan Urban from Auckland, and Marcus Armstrong from Christchurch, won 2014 New Zealand titles in their respective Rotax classes.

Not surprisingly, each driver has also played a leading role so far in this year’s Rotax Max Challenge New Zealand series.

Kinsman currently tops the points standings in the Logitech Rotax Max Light class and Urban is in a similar position in both the Platinum Glass Rotax Max Heavy class and its Masters sub-category.

Defending Arai Rotax Junior title holder Armstrong, meanwhile, is back up to fourth in his class after breaking a chain in the Final at the first round in Palmerston North in February but storming back into 2014 title contention with a dominant class win at the second round at Rotorua in March.

This weekend’s round has attracted a 70+ entry across the three Rotax classes with competitors and officials alike hoping for better – or rather drier – weather than they endured at Rotorua when that round was hit by the tail-end of Cyclone Lusi.

“It certainly was wet, ” says series organiser Gavin Bright. “We got through the weekend OK but it was touch-and-go a couple of times.”

In the Logitech 125cc Rotax Max Light class this weekend Mathew Kinsman can again expect plenty of competition from younger brother Daniel Kinsman, as well as their long-time rival Daniel Connor from Helensville, and locals Andy Schofield from Cambridge and Rhys Tinney from Hamilton.

Former National and reigning North Island class champion Zach Zaloum from Hastings is expected to again push Ryan Urban hard in Platinum Glass 125cc Rotax Max Heavy with Christchurch-based British ace Tiffany Chittenden set to be a factor as well, particularly in the Masters class reckoning where she is currently second to Urban

Arai Rotax Junior will also be close with the on-form Armstrong the favourite but still with points to make up on current series leader Trey Nairn from the Hawke’s Bay, current runner-up Taylor Harte from the Bay of Plenty and third placed Jacob Cranston from Palmerston North.

There will be action at Agrisea Raceway on both days this weekend with qualifying and the first heats on Saturday and the remaining heat, Pre-Final and Final on Sunday.

This weekend’s Rotax Max Challenge New Zealand round is the third of six with KartSport Bay of Plenty set to host the fourth at Fagan’s Valley Raceway near Te Puke over the June 07-08 weekend.