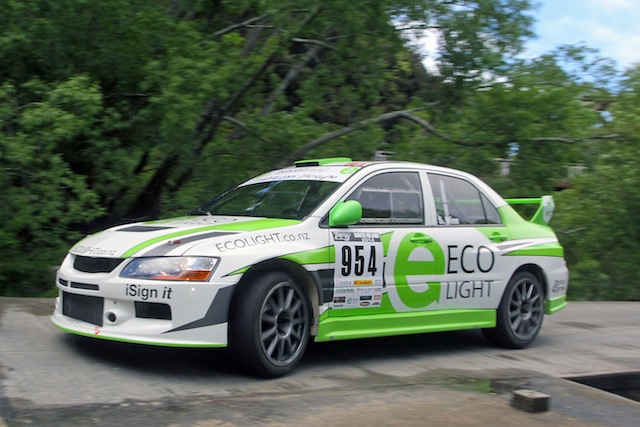 As Glenn Inkster and co-driver Spencer Winn continued on their winning way, the big story on the third timed day of this year’s Targa South Island tarmac rally was developing behind them.

Heading into a smorgasbord of different stages – from the tight, winding 10.74km Larnach stage along Dunedin’s Highcliff Rd between Sheil Hill and Portobello in the morning, to the long, fast, flowing curves of the 42.66km Catlins stage between Owaka and Progress Valley in the afternoon, the day was a true driver’s delight.

Event ambassador ‘Racing’ Ray Williams has been involved as a driver, co-driver or high-speed chauffeur for 19 of the 20 events held so far and says the roads in the South Island just get better and better as the event goes on.

“I found them fabulous, today, absolutely stunning, very challenging; hard to read but extraordinarily rewarding when you get them right,” he said.

Repeating stages – giving drivers a chance to return to a favourite piece of road later in the day – is also proving popular with drivers this year.

Today’s first stage, a 29.97km run through George King Memorial Drive on the edge of the Taieri Gorge near Outram, was a favourite with many, runaway event leader Glenn Inkster included.

” I had a real blast through there the second time,” he said, a fact reflected by his time, at 12m 11s, a full 15 seconds quicker than his first run through in the Ecolight Mitsubishi Evo co-driven by Spencer Winn.

With just a final run around Invercargill’s Teretonga Park to go to complete the day, Inkster and Winn were just over six minutes ahead of fellow Mitsubishi pair Todd and Rhys Bawden in the Instra.com Allcomers 4WD class standings with expat South African pair Nic de Waal and Guy Hodgson upholding Subaru WRX honours in third.

de Waal, was a noted rally driver in his home country before immigrating here had invited former co-driver Guy Hodgson to re-join him for this year’s journey to the South Island which both were loving.

“We’ve had a clean run, the car has been running perfectly and we have had absolutely no problems, ” he said.

As well as being all-new to Hodgson, the roads were also new to de Waal, who was happy to admit that though he had been to Queenstown, that was it as far as his South Island experience.

“It is really great to see the eastern side of the South Island. The weather has been really good too.”

The pair continued to push hard this morning too, winning their class, until disaster struck in the Catlins stage.

“The car worked really well till the last stage when an exhaust failure put a hole in the muffler, “explained Riches. “The hot gases came through and cooked the drive belt which set off a fire, so we got stuck in there, put the fire out and tried to put a new belt on. We’re running but of course it cost us a lot of time. All we can do now is to fight back and try and get some of the places we have lot back again.” 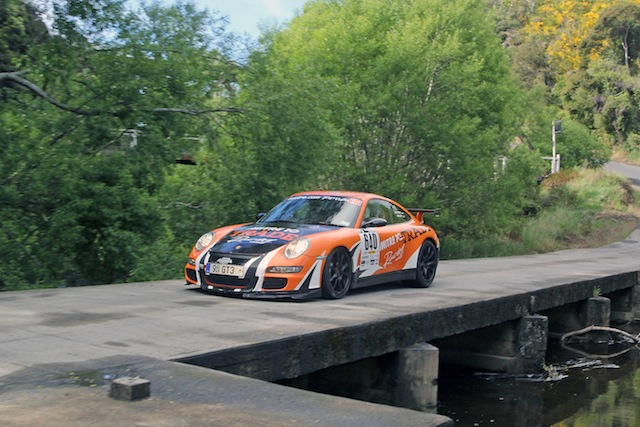 Back in the lead of Instra.com Modern 2WD were Martin Dippe and Jona Grant in their Porsche GT3

After shadowing the Riches over the first two days defending Targa New Zealand title-holders Martin Dippie and Jona Grant stepped up to take the class win in the Catlins stage in their Porsche GT3 and also now lead the class overall from Christchurch pairings Dean Buist and Andrew Bulman in a Mk 11 Ford Escort RS1800 and Marcus Van Klink and Dave Neill in Van Klink’s exotic ex-WRC Citroen C2.

The battle for Metalman Classic 2WD honours, meanwhile, remained tight. Wellington son-and-father pair Mark and Chris Kirk-Burnnand remained in the lead in their BMW M3 but by topping the class time sheets in the first two stages, Rob Ryan and Paul Burborough from Auckland remained in contention just over a minute and a half back after the Catlins stage in their Toyota AE86 Sprinter.

Nelson driver Bruce Farley and co-driver Tim Eddington also won a stage – the roller coaster-like 22.7km Lawrence one from Lawrence to Tuapeka Mouth – and the pair have moved up to third overall in their BMW 325i, displacing Mustang pair Jason Easton and Campbell Ward.

Carl Kirk-Burnnand and Scott Hay also had a good day in their BMW 325i, moving up from eighth to fifth – and in doing so Chris displaced his father, defending class Targa NZ title holder Barry, who with co-driver Dave O’Carroll ended the day sixth in his BMW M3.

With his other son (Mark) leading the class Barry said he was torn between wanting to do well himself and being proud of his sons’ achievements.

Having contested all 19 Targa NZ events in the North Island, Kirk-Burnnand Snr said his favourite today was the one through the Catlins.

“I absolutely loved the last stage – Catlins – it was stunning, just stunning. The big thing I have noticed down here though is that the roads are a lot more open and fast, with an amazing number of blind brows!”

Targa organisers today named the contestants involved in a serious accident in Special Stage 14 near Oamaru. They were father and son Greg and Jackson Fowles from Wellington.

All told, just on 200 entrants will contest 807kms over 34 closed special stages linked by 1828km of open road transport stages on this year’s inaugural Targa South Island event which now heads to Cromwell on Friday before a final day in and around Queenstown on Saturday.