Fresh new backing for Cam Walton ahead of Sandown 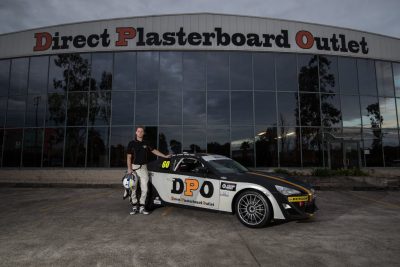 Sydney based British racer, Cam Walton is proud to announce that DPO has jumped on board to back the remainder of his 2018 Toyota 86 Racing Series campaign, commencing with this weekend’s round at Sandown, in Melbourne.

DPO, one of Australia’s largest independent internal linings distributors, have extended their support of Australian motorsport to include major sponsorship for Walton at the remaining three rounds of the Toyota 86 Racing Series, Sandown, Bathurst and Newcastle.

Australian motorsport fans will recognise DPO for their involvement with Nathan Morcom (2016 Australian GT Endurance Champion and current Super2 Series racer) as well as Chaz Mostert (Supercars Star), particularly for their achievements during the Bathurst 6 Hour.

“Cam Walton is on the cusp of breaking through in the 2018 Toyota 86 racing series,” said Scott Fulcher, DPO Manager.

“To support him in his quest, DPO is proud to step up as the major sponsor for Cam’s remaining rounds of the 2018 Toyota 86 series at Sandown, Bathurst and Newcastle.”

“DPO is a leading plasterboard distribution business and is also a major supporter of motor racing, having campaigned the winning BMW in the inaugural 2016 Bathurst 6 hour, supporting Nathan Morcom in his Super2 efforts, along with his Ford Focus RS. You will also find our logo on the helmet of Chaz Mostert.”

“Cam and DPO are both locals of Campbelltown. Get behind your local team and watch Cam take it to the Toyota 86 series.”

The news follows from a successful round at The Bend Motorsport Park, just two weeks ago, where the British racer broke through to stand on the podium for the first time in Australia, also moving up to fourth in one make Toyota series standings.

While the major sponsorship is a new development, the company is actually directly responsible for Walton taking the gamble of moving to Australia to pursue his racing career.

Upon completing his Masters Degree in Motorsport Engineering, Walton made a trip to Australia in order to gain experience in Australia’s competitive motorsport environment, helping Team DPO complete the construction of their new Ford Focus a well as working as part of the crew during the 2017 and 2018 Bathurst 6 Hour campaigns of Nathan Morcom and Chaz Mostert.

It was Walton’s time working with Team DPO that he discovered Australia’s competitive Toyota 86 Racing Series.

“We’re all incredibly proud to have DPO come on-board for the remainder of the 2018 season,” said Walton.

“I owe even being here in Australia to the opportunity to be involved with their Bathurst 6hr program, and their assistance since then has helped me set up over here for our own campaign in the Toyota 86 Racing Series.”

“So for them to now be involved as a major sponsor sees our relationship come full circle, and that’s a massive vote of confidence from such a well-respected, successful company and supporter of motor racing in Australia.”

“It means a lot, and to be mentioned alongside DPO like names such as Morcom and Mostert is an honour.

The Toyota 86 Racing Series will take to the track at Sandown Raceway for the first time on Friday (14/9), for practice ahead of three races as part of Virgin Australia Supercars Sandown 500 support program.

Next Story It's playoffs time in the NASCAR Whelen Euro Series