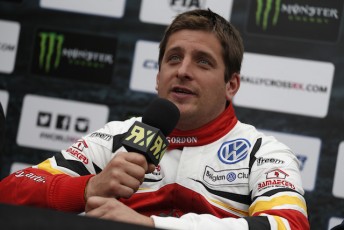 MEDIA RELEASE: Belgian rally driver Francois Duval will contest the upcoming World RX of Belgium, round three of the FIA World Rallycross Championship presented by Monster Energy, which takes place at Mettet next month (13-15 May).

Duval, who has competed at the south Belgian rallycross circuit twice before, will pilot an Olsbergs MSE prepared Fiesta ST RX Supercar.

Duval’s announcement was made at a press conference in Brussels today [Tuesday 26 April] which was attended by over 30 media.

The only Belgian driver to win a round of the FIA World Rally Championship (WRC), Duval also has a strong track record in rallycross after winning the Belgian round of the European Rallycross Championship when it was held at Maasmechelen back in 2010.

“I hope I can make it to the semi-final or maybe even the final this time round,” declared 35-year old Duval, who lives just 30 miles from the home of the Belgian RX round.

Duval added: “It is a very good car and I’m feeling confident, I think I have a very great opportunity here. I watched round one from Portugal on RTBF in Belgium and for sure, there is a lot of competition.

“It will be good to meet some drivers from my WRC days such as Petter [Solberg] and Sebastien [Loeb], I hope I will be able to compete with them. Thanks to Olsbergs MSE, Gordon Finest Beer, Ramaekers, Colson and Valvoline for making this happen.”

The full entry list for World RX of Belgium will be released on www.fiaworldrallycross.com this coming Thursday.