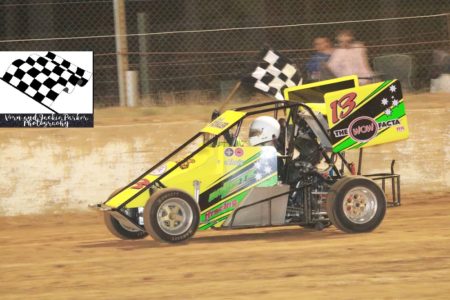 Drivers from the Victorian Grand Prix Midget association headed back to the Goulburn Valley and Rushworth Speedway for the annual Ironbark Classic event and a first victory of the season was taken by Chris Fowler on what was one of the better Rushworth race surfaces in some time and highly commended by the class.

Rushworth is one of the most supportive club venues for the VGPMRA and the relationship between the two clubs continues to thrive.

The first heat of three races for the qualifying stage of the Ironbark Classic had a formation with Fowler from pole position with Jack Ward, Matt Kamolins Alex Myers, Shawn Ward, Ashley Booker and Mark Blackeby in position.

Fowler was away fast early with Booker quickly into second spot and putting on the pressure. On lap three Booker took the lead and Fowler chased with Myers moving into the battle. On lap nine Myers took over second spot as Jack Ward (# 4 Stinger – Suzuki GSX 1100 – John Fowler Racing Team) dropped a chain a lap later to finish infield. Booker took victory from Myers, Fowler, Shawn Ward, Blackeby and Kamolins.

Fowler also pulled out of the race on lap eight after breaking a front panard mount on the front axle and a right front shock. Booker continued with a strong win in front of Shawn Ward, Myers, Blackeby and Kamolins (#22 Independent Chassis – Suzuki GSXR 1100 – Picton Manufacturing).

For the final qualifier Booker began in the pole position with Blackeby, Shawn Ward, Jack Ward, Myers, Fowler and Kamolins the start positions. Kamolins then did not make it on track due to a broken exhaust.

Fowler spun on lap one in turn three so a complete restart with Fowler at the back was required. Shawn Ward also broke a chain on lap one and parked infield. Fowler then moved from last to second and Booker led the field past the steward for the first lap with Fowler, Blackeby, Jack Ward and Myers.

On lap four Blackeby (#10 – Stinger – Yamaha R1 – Spitfire Restaurant and Bar) spun also. Fowler led lap six and a great battle for the win continued with Booker taking the lead and then Fowler retaking the lead on lap ten to get the victory from Booker, Myers, Jack Ward and Blackeby.

Feature race positions were determined with top points from the rear of the field, and this meant Jack Ward and his father Shawn started from the front with Blackeby and Fowler then Myers and Booker (#50 – HMJ Chassis – Yamaha R1 – R & P Stainer Grinding Services) completing the six remaining competitors.

The twelve-lap feature finished soon after with Fowler the winner from Booker, Shawn Ward, Myers and Blackeby.

After the race Fowler spoke to DMT Sports Media about what the win means to him. “It’s a race that we’ve been trying to win for the past 5 years and to finally do it we’re a bit chuffed with the result, Ashley and Shawn were honking tonight and it was a lot of fun having some good battles with them all night.”