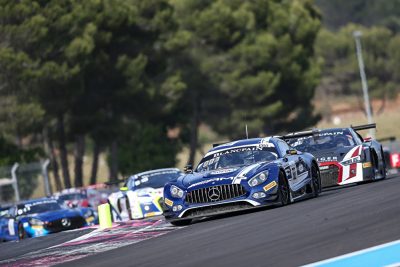 After second and third place in the Blancpain GT Series Endurance Cup at Monza and second place at Silverstone, the teams with the Mercedes-AMG GT3 again showed a strong team performance at Circuit Paul Ricard in France. The #88 Mercedes-AMG Team AKKA ASP with Adam Christodoulou (GBR), Thomas Jäger (GER) und Raffaele Marciello (ITA) secured the best result for the twelve cars from Affalterbach by finishing fourth. In the six-hour race that remained thrilling until the end, three further Mercedes-AMG GT3 made it into the top ten with the #35 (SMP Racing by AKKA ASP), the #44 and the #43 (both STRAKKA Racing). In the classes, Customer Racing Teams were able to celebrate: in the Pro-Am and the Am-category as well as in the Silver Cup, there were podium finishes for the Mercedes-AMG GT3.

Le Castellet (FRA) – At the Circuit Paul Ricard in France, the third round of the Blancpain GT Series Endurance Cup got underway on Saturday. In ideal weather and track conditions, a total of twelve Mercedes-AMG GT3 took on the six-hour race. The #88 of the Mercedes-AMG Team AKKA ASP achieved the best getaway of the cars from Affalterbach: starting driver Thomas Jäger made up positions from tenth place on the grid and remained in the group of the front runners throughout the turbulent opening stage of the race.

In fourth place, the former DTM driver handed the car to Adam Christodoulou (GBR), who kept the Mercedes-AMG GT3 in the top ten at dusk with fast lap times. Numerous safety car interventions and varying pit stop strategies resulted into regular position changes. In the thrilling night hours, final driver Raffaele Marciello (ITA) kept the pressure on the front runners and temporarily set the fastest lap times in the field of 51 cars. A full-course yellow with a quarter of an hour remaining caused additional drama: once racing had resumed, Marciello crossed the finish line in fourth place, only 3.229 seconds short of a podium finish.

The #35 of the Customer Racing Teams SMP Racing by AKKA ASP scored another top result for Mercedes-AMG Motorsport: Denis Bulatov (RUS), Michael Meadows (GBR) and Vitaly Petrov (RUS) had started from eleventh place on the grid and had to give up some positions in the opening stages of the race. The recovery saw the trio make their way back into the top ten. After 172 laps, final driver Meadows brought seventh place home.

The Mercedes-AMG Team BLACK FALCON had bad luck: half an hour into the race, starting driver Maro Engel (GER) in the #4 Mercedes-AMG GT3 already became involved in a collision and had to head back to the pits. After analysis of the damage, the team decided not to continue the race.

Adam Christodoulou, Mercedes-AMG Team AKKA ASP #88: “That was an exciting race. Thomas started from tenth place and did a great job in getting us to the front. My stint wasn’t particularly easy. I had some difficult duels. At the end, Raffaele showed another unbelievable drive, he pushed hard and eventually, we didn’t miss out on a podium by much. Of course, fourth place is always a bit disappointing, but we are happy.”

Adrien Tambay STRAKKA Racing #44: “It was a good race for us. The start was difficult, as was the entire race. But we didn’t make any mistakes and as a result, we were able to move up into the top ten. The car was very good and I am already looking forward to the next race.”

Maximilian Buhk, STRAKKA Racing #43: “We had a drive-through penalty that dropped us quite far back at the beginning. Then, we had to make a lot of effort to fight our way back towards the top ten. All in all, we slightly lacked pace. Nevertheless, ninth place is a good result, but we aren’t there where we want to be yet. That is what we have to work on.”

Maro Engel, Mercedes-AMG Team BLACK FALCON #4: “Our early retirement is really disappointing. It was my fault and I feel really sorry for the entire team. During an overtaking move, I tangled with another car and damaged my suspension in the process. Shortly after that, there was another collision in which I was innocent, that did it for us. Not a good stint.”

The next event on the Blancpain GT Series Endurance Cup calendar is the 24-hour race at Spa-Francorchamps (26-29 July). The next Sprint Cup races will be held at Misano from 22-24 June.