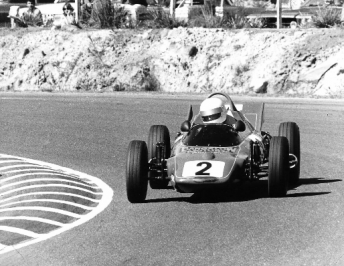 A massive collection of new and old Formula Vee race cars will descend upon Wakefield Park this weekend, 14-15 February, for a commemorative 50th anniversary race meeting.

Formula Vees first appeared in Australia in 1965 – they are small, open-wheel race cars powered by Volkswagen Beetle motors. The original cars were powered by 1200cc motors, but most current cars use 1600cc engines.

Since its introduction, Formula Vee has been a popular category catering to a wide variety of drivers, including aspiring professional racers and those who compete in motorsport for pure enjoyment.

One man who knows the ins and outs of Australian Formula Vee like no one else is John Fabiszewski, who worked as a mechanic and car preparer when Formula Vee race cars first came into Australia in 1965.

“It all started when Volkswagen Australia approached the Australian Automobile Racing Club about running an open-wheel series for cars with Volkswagen engines,” Fabiszewski said.

“The first car imported was called a Formcar; a Volkswagen dealer, Greg Cusack, drove it on a couple of demonstration laps around the old Warwick Farm circuit and it generated plenty of interest.

“Initially, Formula Vees ran as a class within Formula Libre races, but their popularity exploded and by November 1965, they were holding their own races.”

Modern Formula Vee races are characterised by their extremely close wheel-to-wheel racing, slipstreaming and abundance of overtaking. Fabiszewski says this has always been the case.

“Even back in the ‘60s and ‘70s, all the cars were very close together and you could never tell who was going to win the race until the last lap. That is why it became so popular; it was exciting for the spectators, but also very enjoyable for the drivers, who all knew their cars were very similar in performance.

Fabiszewski currently owns a Nota Formula Vee, one of the earliest cars, which will run in the regularity sessions at the 50th anniversary meeting. Also in attendance will be the original Formcar, to be driven by Australian motorsport legend Leo Geoghegan, the original patron of the NSW Formula Vee association.

Other notable drivers attending the meeting include Frank Kleinig, who won the very first Australian Formula Vee race at Warwick Farm, and five-time national Formula Vee Champion Doug Angus, who will be reunited with his original car, pit crew and sponsor for the event.

Off-track attractions will include static displays of historic cars and Formula Vee memorabilia, with more than 60 cars expected to attend.

While many of the older cars will compete in regularity sessions and parade laps, there will be competitive races as well, for both 1200 and 1600-engined cars.

Former state champion Adam Proctor, who won last year’s Australian Sports Racer Series, returns to FVee this weekend aboard a 1600, where he is expected to battle with defending NSW Champion Dylan Thomas.

Admission to the Formula Vee 50th Anniversary Race Meeting is $20 for each day, or $35 for a two-day pass. Children under 16 are free.