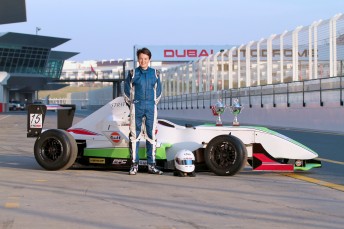 Chris Dittmann Racing have confirmed the signing of Formula Gulf 1000 Champion Tom Bale for the remainder of this year’s BRDC F4 Championship.

Bale, 16, will make his F4 debut at Oulton Park, partnering Tom Jackson at the team, and joins the series having won nine of the 12 races he contested in the 2013/14 Formula Gulf 1000 Championship, while also taking pole position at five of the six rounds he competed in, and 10 fastest laps.

Despite missing the first two rounds of the series in November, he headed into the final weekend of competition at the Yas Marina F1 venue requiring a near perfect weekend to secure the title, and did so with two wins, pole position and a fastest lap.

The Welshman was born in Swansea, but moved to Dubai in 2004, and has raced predominantly in the Middle East and Italy since then.

Prior to his first championship success in cars, Bale enjoyed success in karting, competing in WSK European and CIK World and European Championships. He was classified fourth overall in the 2012 CIK Academy Championship, including a double win at the final round in Bahrain and is also a three times UAE Cadet Karting Champion.

Team Principal Chris Dittmann commented: “It’s fantastic to sign Tom for the rest of the season and we are really looking forward to his first F4 race at Oulton Park. Joining the championship part way through the season will prove challenging, however with our support and his proven track record racing in Dubai, I’m sure it won’t be long before he is up to speed and fighting up the sharp end.”