Formula Ford 1600 champion to be crowned at SMP

Formula Ford 1600 champion to be crowned at SMP 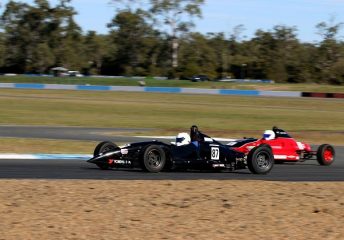 At least one Australian Formula Ford Series Champion will be crowned at Sydney Motorsport Park this weekend, with the event marking the third and final round of the Formula Ford 1600 competition for vehicles powered by Ford Kent motors.

The Kent series is set for a blockbuster finish with just four points separating Tim Hamilton and Mitch Maddren at the top of the standings.

Maddren won the opening round at Winton after a remarkable recovery from a crash early in the weekend, and was in fine form in Round 2 at Queensland Raceway, winning the first two races. However, a DNF in the final due to mechanical problems cost him severely, and handed the championship ascendancy to Hamilton.

The outright (Duratec Class) title could be decided as well, with Max Vidau enjoying a healthy 52 point advantage over his nearest rival, Borland Racing Developments driver Jayden Ojeda. If the 16-year-old South Australian can extend his lead to 62 points by the end of the weekend, he will wrap up the championship with a round to spare.

In 2005, the western Sydney circuit hosted two rounds of the series, just a few weeks apart.

So far in 2017, the Australian Formula Ford Series has had race winners from four different Australian states (Queensland, New South Wales, Victoria and South Australia), as well as New Zealand.