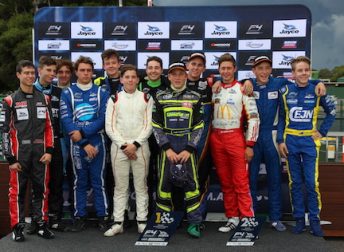 Round Three of the 2017 CAMS Jayco Australian Formula 4 Championship will visit Western Australia this weekend for the first time in the Championship’s history.

Supporting the Supercars Perth SuperSprint at Barbagallo Raceway, the event will be the home round for West Australian racers Nick Rowe (AGI Sport) and Aaron Love (Team BRM).

Rowe, who was Sandown’s Round Two winner in April, will be looking to catch up on current points leader Liam Lawson (Team BRM). The New Zealander impressed on his Australian Formula 4 debut by claiming victory in Round One and second in Round Two at Sandown.

The four CAMS Foundation Rising Stars – Simon Fallon, Cameron Shields, Zane Morse and Ryan Suhle – will regroup in Barbagallo, with Shields’ third place finish in Round Two the best result so far from the group.

The CAMS Jayco Australian Formula 4 Championship will explore its first laps around Barbagallo on Friday morning with two practice sessions to be held at 9:00am and 11:25am AWST.

The drivers will then qualify for pole position at 2:00pm Friday, with the fastest driver to be awarded with a $500 Virgin Australian flight credit prize.

Three races will be held across Saturday and Sunday, with all sessions to be broadcast live on Fox Sports 5 (506) and on Foxtel Play.

Video interviews and images from Barbagallo will be made available at formula4.com.au, live text commentary at @Formula4AU on Twitter.