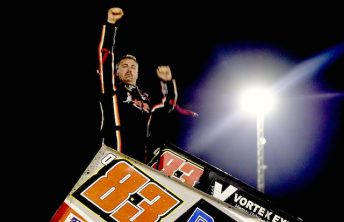 The Tasmanian raised, Melbourne based racer will suit up with Horrell Motorsport for the first time this season in the familiar Q83 Mainline Dynalog Dynamometers entry with the same crew that have partnered with him in his two Australian titles.

Murcott’s results at the Charlton venue were at extremes last season, winning the March 25 event in fine fashion to then return just over a week later to start on the front row and crash out on the first lap after an altercation with James McFadden.

He finished last season with a win at Archerfield in late May and then begin the 2016-17 season with a victory at Moama before making the podium on two other occasions, cementing his place as a legitimate threat to the travelling World Series Sprintcars entrants this weekend.

You can see the action live at Hi-Tec Oils Speedway Toowoomba from 5pm this Saturday or catch it on Clayperview.com