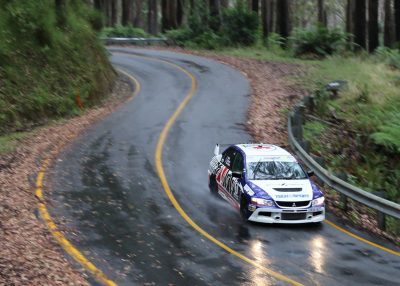 The second round of the 2018 Australian Tarmac Rally Championship will take to the roads around Mt Baw Baw on March 10/11. While Danny Traverso and Jason Page look to extend their championship lead in the Mitsubishi Evo VII, the pair will not have an easy time defending their position at the top.

A vehicle well suited to the narrow confines of the Mt Baw Baw Sprint is the Audi TT and this weekend there will be three competing in the field. Regular TT competitors Barry Smith and Dale Moscatt will have to watch for their old car, piloted now by Paul Dowie and Mitch Lukasz, who will no doubt be looking to knock Barry off his perch as top Audi TT driver.

Not to be disregarded from the mix are Subaru stalwarts Mick Harding and Steve Glenney, round one saw the pair find the best from the WRX to take multiple stage victories and give eventual winner Traverso a run for his money. Watch for the Subaru to spring some stage victories and feature at the top of the standings.

Also in the mix will be the beautiful dodge viper of Richard and Chris Perini. After some teething problems at round one the pair will be looking to make a successful bounce back to the top of the standings, with the climb up to the Mt Baw Baw summit producing an opportunity for the high horsepower dodge to claw back time.

With thirty three entrants ready to take on over two hundred and ten competition kilometers, punctuated with a climb up the steepest tarmac race road in the country, the fight is bound to be fierce across the weekend. The Australian Tarmac Rally Championship Facebook page will provide plenty of updates across the weekend, meaning fans won’t miss out on a moment of action, so make sure to follow the page now.