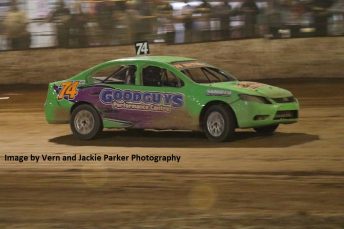 Race drivers loyal to the iconic brands in Australian motoring brought their chosen weapon to Alexandra Speedway on December the 9th to do battle to see who was the top manufacturer and who was the top of their manufacturer for one night only and it was Ford and Ford gun driver Lenny Bates from Boronia, who won the war.

Competitors were mostly from across Victoria with Holden having a West Australian and a South Australian in their team whilst Ford had a New South Welshman come down to mix it up with front runners.

Nine heat races were run and from the second round to the end of the third round, they were run in quick succession as the host club discovered a wiring issue that potentially was going to cause problems with the lighting, and it did!!

Ford won seven of nine heat races starting off with the first four before Holden picked up a win. Bates the current Australia number 2 ranked driver won the first heat, Chris Stewart and Jayden Blomeley won the next two then Bates won the first heat in round two. The South Australian Jayden Edwards put Holden on the score card with a win in heat five.

Darryl Atkinson won heat six, Stewart won heat seven, Bates became the one and only driver to win all three of his qualifying heat races and Brad McClure put Holden’s second win on the board in heat nine. Amazingly all nine heat races were determined by less than 1.5 seconds race margins. Incredibly close racing.

There was money up for grabs for the Ford side of the field and the Holden side of the field in the final; however the real reward was to win the race and have bragging rights for the next twelve months. The top Fords on the starting grid were Bates, Stewart, Atkinson, Corey Sandow and John Lodge Jnr from NSW whilst on the Holden side Leigh Gooding had qualified as their top driver over McClure, Edwards, Darren Giacometti and Eugene Bennett.

An amazing first half of the race of twelve laps in one direction before the field turned to race the other way had Bates, Stewart and Lodge Jnr lighting it up for Ford fans. McClure went backwards before coming forwards and Bennett and Edwards were having a ding dong battle just a little bit back.

When the first half of the race finished to switch the cars around, Lodge had taken the cash for first half race leader from Bates, McClure, Stewart, Atkinson, Bennett, Edwards, Sandow, Blomeley and Giacometti who completed the top ten.

The second half of the race got far enough for Bates to get in front of Lodge Jnr and McClure to do the same whilst Edwards made some way forward also before the lights went out, due to the wiring issues discovered earlier. The race was declared as more than half race was completed and Bates was given the chequered flag to celebrate his win overall and the win of the first Ford.

McClure won the Holden side of the race and picked up a wad of cash also. Bates won the race from McClure, Lodge Jnr, Stewart and Edwards. Bates set an eight lap record during the heats and Lodge Jnr set a new 12 lap record in the first half of the feature.

The wiring issues caused the support classes to have their divisions declared on points. Corowa’s Ross Maclean was the winner in the Goulburn Ovens Sedan Association from son and father duo Mark and Frank Gordon. Trev Goldsworthy from the Wangaratta club won the Standard Saloons from Darryl Joosten and Cory Horter who had his first ever heat race win during the night. Goldsworthy set a new six lap track record on his way to winning the night.

Kilmore brother and sister Courtney and Rhys Meakins won the National Juniors A and B Grade finals. Courtney won the A final from Callum Potter and Tim Gorski whilst Rhys won the B final from Bree Simpson and Chloe Sheerman. Nick Cherry won the Victorian Speedway Council Junior class from Connor Donegan and Rhys Meakins and Jake Rosser tied for third place.

The Sports Sedan racing was dominated by David Donegan, Steve Kershaw and Andrew Jordan with Donegan the winner on points and fastest lap time for the class.

Racing at Alexandra now has a break to avoid the total fire ban season and returns in March, in the meantime Alexandra members will head off to compete around Victoria with Wangaratta, Nyora and Redline some of the popular destinations for drivers to head too.

Alexandra Speedway Club is very thankful for the support provided by all these businesses: