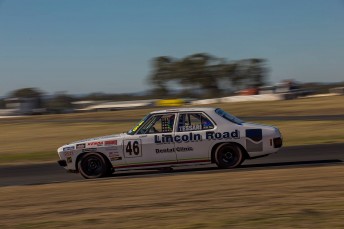 Victorian HQ Holden front runners David and Marc Tessari will make the journey to the annual Muscle Car Masters at Sydney Motorsport Park this weekend with the HQ Holdens acting as an invited support category with a grid of in excess of 50 of the 1970’s Australian built favourites.

The team took part in the recent NSW State Championship series round at Sydney Motorsport Park in preparation for the Muscle Car Masters event which saw David record consistent top three race results, giving him confidence ahead of the standalone event this weekend.

Both David and Marc also competed in the recent third round of the South Australian State Series at Mallala, while it was Marc’s first ever event at the track, David continued his battle with local, Joel Heinrich, finishing inside the top two.

This weekend provides a healthy opportunity for exposure for the growing team, as the pair lead a younger contingent in the one make category. With national television covering the event, both David and Marc are looking forward to increasing the awareness of their team and the sponsors and supporters behind the scenes.

David Tessari; “Sydney Motorsport Park is a fast flowing track in particular at turn one which we take at over 175km/hr in the HQ, which is a real buzz and gets the heart rate up. It will be a great challenge to run against some of the best cars and drivers in Australia at such a fantastic iconic Australian event.

“2014 has been a very strong year for Footrot Flats Motorsport, in particular in the Victorian State Series. We’ve also recorded some great results at Mallala in the SA State Series and at the last event at Sydney Motorsport Park. I put that down to lots of hard work by our team, and surrounding ourselves with the right technical expertise. With a capacity grid of 50 cars, the Muscle Car Masters will make for a great spectacle.”

Marc Tessari; “It was great to get some laps in at Sydney Motorsport Park at the last NSW State round, we had an excellent weekend and it was very good experience for myself competing in the wet. We have some great performance upgrades coming into this weekend so that should keep us in strong contention for the racing.