No fool like no fuel laments sprintcar top gun

No fool like no fuel laments sprintcar top gun 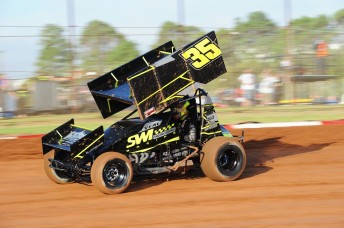 After starting from position nine in the final, he chased down the early leaders to finally hit the front.

Then, with a lap remaining, his engine spluttered as Adelaide local Scott Bogucki closed on him and rushed by on the outside in the last corner to win by a whisker.

Having just returned from a successful campaign in the US, it was not the way McFadden planned to start his Australian season.

McFadden admitted his car had been under filled by his crew before the race and promised it was an oversight that is unlikely to be repeated.

Meanwhile at the Moama circuit, Warrnambool wonder boy Jamie Veal won the opening round of the Eureka Garages and Sheds SRA premiership.

Starting from pole position Veal streaked into the lead to fend off Glen Sutherland and Sydney racer Max Johnston.

McFadden and Veal headline a star studded field in the 10K to win Sprintcar Jackpot at Geelong’s Avalon Raceway.

The meeting opens the capital city sprintcar season and promoters anticipate a huge crowd for the Avalon-inspired Jackpot that trims the 31 car field back to 12 for the final, over 10 laps.

“The Jackpot puts every driver under pressure from the outset and tatics are everything when you’ve got your elbows up,” said Raceway spokesman Jeff Drew last night.