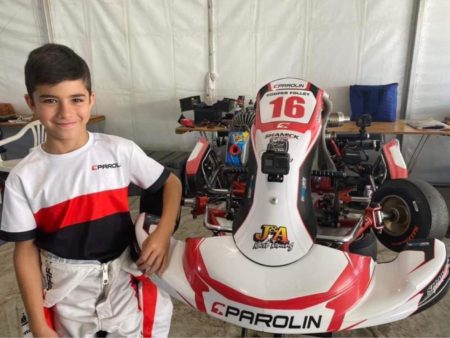 Cooper Folley took on the third round of the SP Tools Australian Kart Championship at the Eastern Lions Kart Club. Folley has had a brilliant start to the 2022 season. Cooper was right in the fight for victory at the recent Victorian Kart Championships grabbing a podium in third spot. Running under the Shamick Racing / Parolin Australia banner, Folley was looking to get the best result possible over the weekend.

Folley spent all of Friday practice getting his setup in the window and was heading out in the upper fifty percent for qualifying. The Shamick Racing backed entry put himself immediately in the top ten and was looking to improve as the session went on. Cooper put himself in the top five of the near fifty kart field and was pushing as hard as he could for pole position. Folley did an amazing job and set the fourth fastest time, putting himself on the outside of the second row.

The heavens had opened up on Friday night and Cooper was presented with a wet track to start Saturday. The Parolin Australia sponsored entry dropped back to position five on the opening lap and was looking to make places back up. Cooper stayed in that spot until the back end of the race where he was able to make a move for fourth place. Folley crossed the line in position four overall in an excellent start to his racing weekend.

Folley had a wild second heat, starting by jumping up to second spot on the opening lap. The J & A Tuning powered and supported entry was unfortunately shuffled back through the middle stages and was on the edge of the top ten. Cooper put his head down and started to work his way forward and was pushing the edge of the top five. Folley crossed the line in position six overall grabbing some more good points to his championship.

Cooper was once again out of fourth spot but an incident on the opening lap put him back to seventeenth place with plenty of work to do. The Owen Bain Electrical backed entry put his head down and starting steaming towards the top ten with excellent pace and true determination. Folley was able to make his way back into the top ten and crossed the line in ninth position making up eight position in nine laps in a brilliant fight back.

Folley was looking to finish his heat racing on a high and he was able to slot into third spot overall after the opening lap. The Shamick Racing entry put his head down and tried his heart out to stay with the top two and challenge for victory. In another tough wet but wild race, Cooper was able to come through and get his best result of the weekend in third spot! With all four of his heats result, Cooper was starting in position four on the grid for the final.

The nerves were high as Cooper was wanting to put his best foot forward and challenge for victory. In a heart breaking incident, Folley was run off at the first corner and re-joined the track at the rear of the forty kart field. The Parolin Australia backed entry put his head down and was charging back up the field. With plenty of overtakes and a never give up attitude, Cooper was able to cross the line in position twenty overall making up around twenty positions after his incident on the opening lap!

Cooper’s parents spoke post weekend of their young drivers racing. “We were incredibly proud of Cooper over the weekend, he drove smart with very little mistakes. He had some great results and was feeling positive going into the final in fourth place. Unfortunately, a hard hit in the first corner sent Cooper into a spin and he ended up in the grass. He did everything he could to get going again bouncing the kart and pushing the wheels with his feet which worked but the field was half a lap ahead. He fought hard to catch up and get to 20th which we are so proud of as he never gave up. We absolutely had a ball thanks our amazing Karting friends, Parolin/Shamick Family, Sponsors and the great work the club and volunteers did”. Folley will be a driver to watch and remember come the rest of the 2022 season!