Foessel steps up to the challenge at Phillip Island

Foessel steps up to the challenge at Phillip Island 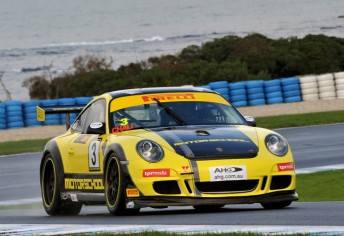 Young gun Ben Foessel recorded his first victory for the season behind the wheel of his Porsche 997 Cup car in the Challenge Class of Australian GT over the weekend at Phillip Island.

With treacherous conditions at the track, there were a number of incidents in the early sessions, but finding his limits in the wet, he was able to hold his ground and punch ahead of the pack.

During the 101, a pit lane drive through penalty did little to break the pace of the Queensland driver, gaining over a minute on the rest of the class at the half way point with consistent 1:36 to 1:37 pace.

The rest of the field managed to close the gap during the final pit stop; however the Motor School team were still able to maintain a convincing one lap advantage over their main rivals to secure the win.

Ben Foessel (Motor School Team Driver) – “This was a great victory for the team, this is only our second year in Australian GT and this was my first race in the 997 in wet conditions. It was a steep learning curve, especially at the challenging Phillip Island Circuit, but once I found my markers, we were able to keep our pace and hold on for the win. It’s a great feeling to be able to produce consistent times and I’m looking to build on this result for the next round in Townsville.”