Focus on finishing for Gilmour

Focus on finishing for Gilmour 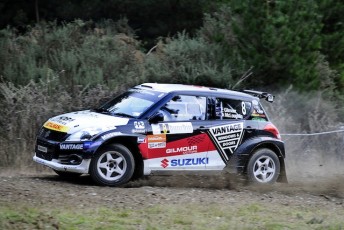 MEDIA RELEASE: rallying – Emma Gilmour has one main goal in sight at this weekend’s Lone Star Rally of Canterbury – the finish flags at the end of the ten stages.

She and Australian co-driver Anthony McLoughlin will be doing their utmost to bring the Vantage Suzuki Swift Maxi home in one piece, trailing a string of competitive times behind them.

“I am focused on finishing the rally. It has been very frustrating that we haven’t been able to show the speed of the Vantage Suzuki Swift Maxi to its true potential,” Emma says.

Early indications from the Rally of Otago earlier this month, showed the car was capable of keeping up with the front-runners. Unfortunately contact with a stump damaged the gearbox oil cooler on the first stage, leaving Gilmour and McLoughlin out of the event, before they could properly get going.

“We know from the splits at Otago that the car is quick. We just need to bring it all together and get a result for the car and the team that they deserve,” Emma says.

With round three of the Brian Green Property Group New Zealand Rally Championship held in the Ashley and Okuku forests, the surface grip could become slippery, with cool weather forecasted, including the possibility of snow – ensuring that the rally will have all the elements to challenge drivers.

Emma says to bring it on.

“Conditions could be quite tricky this weekend. However, I like the challenge of forestry roads, which added to the extra concentration needed for Saturday’s two night stages, means it is going to be an exciting, full-on event.”

The Lone Star Rally of Canterbury gets underway with a ceremonial start at the Lone Star on Christchurch’s Manchester St on Saturday at 5pm. Then two night stages follow from 6.10pm in Ashley Forest.

On Sunday the cars begin from Rangiora and complete eight more stages, with servicing in the Rangiora council car park. Crews return to the Lone Star from 4.45pm for the finishing ceremony and prizegiving after completing 171 kilometres of competitive driving.