Flood of entries received for final AEC round

Flood of entries received for final AEC round 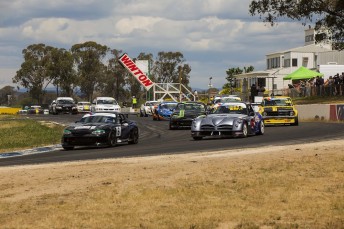 The final round of the 2014 Australian Endurance Championship, the Valvoline Winton 300, is set to break new ground for endurance racing in Australia, with in excess of 80 entries already received since they opened at the beginning of the month.The Valvoline Winton 300 will be held on 8-9 November, with the winners to be presented with the coveted Michael J Ronke Memorial Trophy.2013 winners Nick Cancian and Rob Hay were among the first competitors to submit their entry, and are looking forward to defending their title aboard the Ezy Profile Systems/Colder Refrigeration Mazda MX5 Turbo.“Last year’s win was excellent but we don’t just want it to be a one-off, we want to come back and do it again,” Cancian said.“This year’s field looks like it’s even more competitive so it will be a big job to go back-to-back, but we’ve improved the car since last year and had some good results in Production Sports Cars at the Bathurst Motor Festival and supporting the V8 Supercars at Queensland Raceway.”A notable competitor on the provisional entry list is motorsport legend John Bowe, who will team up with Albury driver Greg Jones aboard a Ford EF Falcon Future Tourer. Bowe already has a major endurance race win under his belt in 2014 with his Bathurst 12 Hour triumph in February, but is looking forward to the more relaxed atmosphere of the Winton 300.Other high-profile names set to compete in the event include Kumho Tyres V8 Touring Car competitors Justin Ruggier and Matt Chahda, and the two most recent Australian Formula Vee Champions Matt Stubbs and Daniel Reynolds.One feature of the Winton 300 is the variety of machinery able to participate, with vehicles separated into classes via a unique division system which grades cars on their lap times rather than their mechanical specifications.The result is a massive assortment of machinery which ranges from turbocharged, all-wheel-drive production cars, to Aussie V8 muscle cars, lightweight sports cars, budget front-wheel-drive four cylinders, motorcycle-engined miniature race cars and everything in between.With Winton’s grid capacity capped at 50 cars, it is highly likely the event will expand to include a “B-Main” race for the slower cars, followed by the main event for the faster cars. This two-race format was successfully implemented for the first round of the AEC, the Valvoline Wakefield 300 in March, with positive feedback from the competitors.