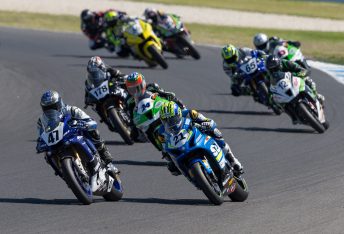 Next week will see the nation’s best riders converge at Phillip Island Grand Prix Circuit for the grand finale round of the 2017 Yamaha Motor Finance Australian Superbike Championship presented by Motul Pirelli (ASBK). The stakes for this concluding round are higher than ever and here are five major reasons why you simply can’t miss out on the action (October 6-8).

1. Five classes will go down to the wire:
This year has been nothing short of thrilling, and the final round will prove just how competitive the ASBK Championship has been so far. No fewer than five classes will be wrapped up at the Spokes.com.au presents Round 7 Phillip Island Grand Prix Circuit, including the YMI Superbike, Hi-Tec Batteries Supersport 300 ‘Over’, YMF R3 Cup, Moto 3 / 125, and Australian Sidecar Championship.

2. The world’s greatest motorcycle track with Australia’s most elite riders
Phillip Island Grand Prix Circuit is without a doubt one of the world’s greatest motorcycle tracks. The circuit is always a favourite amongst the rider’s due to its high-speed sweepers, which test out the rider’s skill and bravery. The track often throws up unpredictable results and allows the rider to make the difference, whatever the machinery at their disposal.

3. Spokes.com.au rider Q&A sessions and prize giveaways
Spokes.com.au have partnered with ASBK to spread messages of road safety for the Victorian rounds of the championship. The final 2017 ASBK round at Phillip Island Grand Prix Circuit is the perfect opportunity to make sure riders are across the latest information to keep them safe on the roads. Several Spokes.com.au Rider Q&A sessions will be taking place during lunch time over the course of the race weekend.

Spokes staff will be on hand to provide information to Superbike fans in the ASBK paddock, as well as offering the chance for some lucky racegoers to win a suite of prize giveaways. Promotions onsite will include a game card competition to win a $1000 protective clothing voucher, plus there are spinning wheel prizes including 12 pairs of gloves and five sets of boots up for grabs across the weekend. There is also Spokes merchandise with each game card entry.

4. Stunt rider Dave McKenna to stun fans:
Yamaha stunt rider, Dave McKenna will keep the crowds on their toes, defying gravity with tricks, twists and burnouts on board his Yamaha MT-10 machine. Amongst one of the greats in Australian Stunt bike riding, McKenna will be on track for all fans to see, entertaining the crowds in between racing. As if things couldn’t get any more exciting!

5. Be there to witness Australian motorcycle racing history
In what has been one of the most exciting ASBK seasons for many years, there’s nothing like being there in person to witness champions being crowned. 2017 is sure to be a year that’s remembered for decades to come, with twists and turns at every round.

There are sure to be more unexpected and exciting curveballs to be expected at the Spokes.com.au presents Round 7 Phillip Island Grand Prix Circuit. Why not gather your friends and family together to make the trek to the Island for the conclusion to the pulsating 2017 ASBK season?

ASBK is live on SBS and Live Streaming
Fans will be treated to plenty of action on and off the track next weekend, however for the fans who can’t be at Phillip Island, the ASBK has provided them with the best opportunity to stay up to speed with everything happening on October 8.

From 9:30 am AEST the ASBK will be broadcast LIVE to everyone in the world via the ASBK website. Capturing the live racing moments, exclusive interviews with past and present champions and so much more, the Live Stream is not to be missed.

Starting from 1:00 pm, the ASBK will be shown on free to air television on channel SBS, with two hours of pulsating coverage.

Start planning your journey to ‘the Island’ for the Spokes.com.au presents Round 7 at Phillip Island Grand Prix Circuit, VIC on 6th- 8th October 2017.

As always, stay up to date with all the latest news and updates from the ASBK by liking ASBK on Facebook, following the @asbk on Instagram and checking out the ASBK website here.