Five Porsche 911 RSR qualify for the Hyperpole at Le Mans

Five Porsche 911 RSR qualify for the Hyperpole at Le Mans 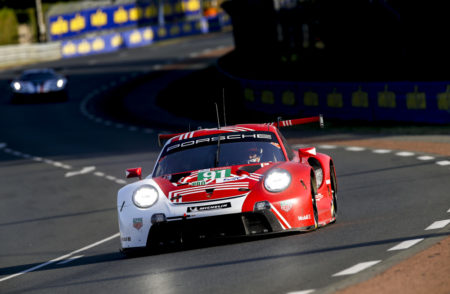 The Porsche GT Team has qualified for the Hyperpole, the final qualifying session at Le Mans, with the two ca. 515 hp 911 RSR. The six fastest cars from each of the four classes take part in this decisive shootout for the best grid spots on Friday (September 18). In the 45-minute qualifying session, the Italian Gianmaria Bruni clocked the fifth-fastest lap time in the GTE-Pro class at the wheel of the No. 91 car. His works driver colleague Michael Christensen from Denmark turned the sixth quickest lap in the identical No. 92 sister car. In the GTE-Am category, three Porsche 911 RSR made it into the new Hyperpole qualifying session.

With an air temperature of 30 degrees Celsius and a track surface reaching almost 50-degrees, Bruni and Christensen opted for an early attack. Clocking a time of 3:52.036 minutes, the experienced Italian, who had set a qualifying record for GTE vehicles at Le Mans in 2018, initially achieved third place. Christensen lost valuable time in heavy traffic with 57 vehicles on the 13.626-kilometre circuit and slotted into fourth place, around a tenth of a second behind his teammate. When both Porsche 911 RSR launched a final attack shortly before the end of the session, neither Bruni nor Christensen managed to get a free run. Two rivals, however, improved their times and the two works cars from Weissach were relegated to fifth and sixth.

In the GTE-Am class, three Porsche 911 RSR in last year’s specification will join the Hyperpole field on Friday. Britain’s Benjamin Barker set the third quickest time with the No. 86 entry of Gulf Racing. Works driver Matt Campbell from Australia planted the No. 77 car fielded by Dempsey-Proton Racing on fifth. The Italian Matteo Cairoli secured position six in the No. 56 car of last year’s winning team Project 1.

The new Hyperpole at Le Mans, which determines the final grid allocation of the six fastest cars per class, is held on Friday, 18 September, at 11:30 am. Prior to this, a total of 59 cars will take part in another free practice from 10:00 until 11:00 am. The 88th edition of the 24 Hours of Le Mans gets underway on Saturday, 19 September, at 2:30 pm.

Qualifying quotes
Alexander Stehlig (Head of Operations FIA WEC): “We had a lot of work to do today. The setup that we’d worked out in advance didn’t really work at first. We made many changes so that the drivers could get more comfortable with the handling of the car. Things went significantly better in the second practice session. We made it into the Hyperpole, but we have to do better because we don’t want to start from fifth and sixth, we have to move up at least one more grid row.”

Gianmaria Bruni (Porsche 911 RSR #91): “I managed two clean laps. However, the vehicle balance was noticeably better at my first attempt that at the end of the session, so I didn’t manage to improve. This is our first time at Le Mans with the latest Porsche 911 RSR. Our setup is not yet optimal. We’ll look at the data and make improvements to the car for the upcoming sessions.”

Michael Christensen (Porsche 911 RSR #92): “We’re in the Hyperpole – that was our aim. Unfortunately, the gap to the fastest in the qualifying is much larger than we expected. We urgently need to work on that. Still, I see a lot more potential in the car, which we now need to tap into. I’m confident we’ll manage this.”

Benjamin Barker (Porsche 911 RSR #86): “We worked very hard and systematically on the setup during the practice sessions. That was incredibly exhausting for our mechanics, but it was worth it: We are the fastest Porsche in our class. I hope that we can finish the Hyperpole at least on third place, as well. The further down the field we are, the more time we lose in the heavy traffic of the first stint in the race.”

Matt Campbell (Porsche 911 RSR #77): “We made it into the Hyperpole. That was an important step. But we’re not yet completely happy with the car setup. We’ll analyse the data and look for ways to improve. We want to do better in tomorrow’s fight for the best grid spots.”

Matteo Cairoli (Porsche 911 RSR #56): “We qualified on sixth. It’s enough to get us into the Hyperpole, but the qualifying certainly didn’t go smoothly for us. At the first attempt I got stuck behind two cars, afterwards, there was a miscommunication with the team. This prevented me from achieving a better time.”