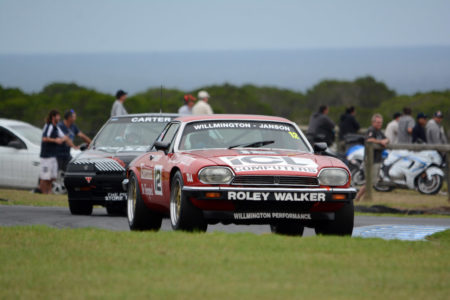 Image thanks to Brent Murray / At Speed Images

We’re very pleased to welcome several drivers joining us all the way from New Zealand, including Graeme Cameron, Greg Murphy and Jim Richards.

Ex-V8 Supercar driver Greg Murphy’s credentials speak for themselves, and we’re excited to welcome another motorsport icon to the category. He’ll pilot an M3 which ran with BMW Motorsport in the inaugural 1987 World Touring Car Championship. It made its way to Australia that year and was steered to 7th place in the James Hardie 1000 by Johnny Cecotto and Gianfranco Brancatelli.

Graeme Cameron will bring a Unitron M3 out to play. The car competed in the 1992 Deutsche Tourenwagen Masters and Cameron is a very experienced racer who has earned a great deal of success in his driving career. We’re sure he’ll contribute some exciting motor sport to the field.

New Zealand legend Jim Richards has run with us several times, and will once again be behind the wheel of an ex-JPS twin cam 635CSi which has recently been restored to its 1984 Bathurst condition.

Our third BMW debutant at Phillip Island is the 635CSi of Charlie O’Brien. Charlie himself raced the car in the 1985 Australian Touring Car Championship, and has recently restored it to its ‘86 Bathurst spec, when John English drove it.

Moving closer to home and Terry Lawlor will take a break from the all-conquering Sierra to take on a new challenge – an ex-Bob Morris 1980 Falcon XD. This is the Channel 7 Breville Racing car piloted by Bill O’Brien, Bob Morris and Allan Moffat in the 1980 Hardie-Ferodo 1000. It became the first car to be involved in a cross-entering driver swap when four-time Bathurst winner Allan Moffat’s Falcon expired early in the race and he ended up jumping behind the wheel of this car. 1980 was his last appearance in the great race.

On the other side of the great Australian divide is Gary Chick, who will be introducing a Group C Craven Mild Racing Commodore to the series. This is another car raced by Bob Morris in the 1980 ATCC. Allan Grice and John Smith drove it at Bathurst that year, going one spot quicker than the Channel 7 Breville Racing car in Hardies Heroes, claiming fifth there and eventually taking it home in 7th.

These will be joined by a spectacular field of Group C and Group A Australian touring cars, featuring everything from smaller capacity cars like Craig Foster’s ex-Toyota Team Australia AE86 or the Escorts of Russell Keam and Justin Matthews to technological masterpieces like Tony Karanfilovski and Chris Stillwell’s Ford Sierras or the iconic V8 Commodores and Falcons of Group C.

The Phillip Island Classic is an icon in its own right and is one of the country’s biggest motor sport events, attracting around 500 historic machines each year to compete on the spectacular Phillip Island Grand Prix Circuit. Larry Perkins has been announced as the event patron this year and his son Jack will be racing a fully restored Commodore driven by his father in the 2003 Bob Jane T-Marts 1000.

The 60th anniversary of Frank Coad’s Armstrong 500 win in 1960 will also be celebrated this year. The first Armstrong 500 was held at Phillip Island and would eventually move to Bathurst, going on to become the Bathurst 1000.

Stay tuned to www.heritagetouringcars.com.au for more from the Legends of Bathurst, and we’ll see you in Victoria this March 5 – 8!