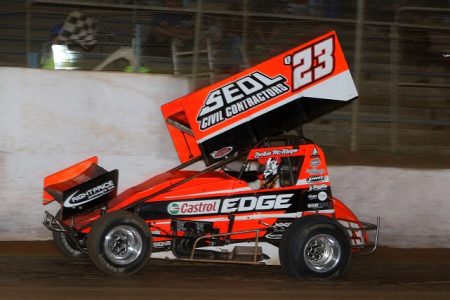 The Gold Coast based racer was buoyant after claiming his second win of the season last Saturday in Brisbane, adding to his prior tally of one win, a second and a pair of fourths.

“In the past we’ve started the season pretty average before showing some form in January, but this year it seems like we’re on the money straight away which is really encouraging, not just for us but for our two new partners in Revolution Racegear and Dane and Andrea Beerling from Dondex Sheds.”

“We used to get to a racetrack and would be flying blind because there’s just so much to learn about these race cars, but now we feel like we show up and have a decent handle on how we need to set up. I don’t think you can ever know everything though, because even the greatest drivers and teams keep learning something new every week.”

Twenty-year-old McHugh was transparent when asked what had changed to deliver the enviable results, touting his crew’s sheer commitment as the conclusive reason.

“I’d really like to publicly acknowledge how hard my crew works, not just in maintenance between races and events, but in learning the craft of Sprintcar set-up. A lot has been said about my busy schedule of Uni and racing and working part time for PWR Performance Products, but that’s really nothing compared to how much effort Dad, Chris and Brooke Topp, Glenn Seton, Brian Hicks, Liam Haigh and Paul Broughton have put in to this team, as well as newcomer, Scott Horwood who’s been a brilliant addition and a massive asset.”

Horwood’s inclusion in the SEDL Earthmoving/Right Price Auto/Global Lubricants backed squad has prompted some southern travelling for the team, visiting Warrnambool, Mount Gambier and Murray Bridge back to back over the next three weekends before returning to his native Queensland competition for two shows in December, then revisiting Murray Bridge for round one of World Series Sprintcars on Boxing Day.

“It will be great to get more laps on the southern tracks just to get a little more knowledge before Speedweek, but it’s going to make the next few weeks pretty busy that’s for sure!”

“We’d love our fans to keep up to date with our progress through the McHugh Motorsport Facebook page, especially this weekend as it’s the Victorian Sprintcar Title at Warrnambool. That’s a great place with great people and a track that really suits my style of driving so I’m really looking forward to it and hopefully can continue this great run we’ve experienced so far.”