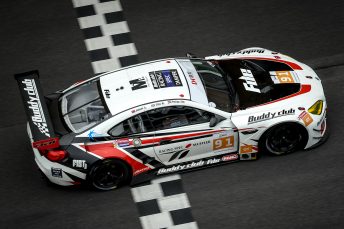 The aai motorsport team will have four cars in GT Asia

MEDIA RELEASE: aai motorsports are a powerhouse in Asian motorsport, with a roster of GT machinery the envy of teams all over the world, but whilst their major commitment to GT racing in past seasons has been to attracting an entry in the iconic Le Mans 24 Hours [which they achieved in 2015 and 2016] and to Asia’s jewel in the crown – Macau, they’ve only contested intermittent events in GT3 competition – but all of that is about to change.

“We’re proud to reveal that aai motorsports have entered four cars for the full 2017 GT Asia Series,” David Sonenscher, the CEO of Motorsport Asia Limited confirmed. “They’re such a high profile team in Asia, and always provide a competitive challenge to the established teams in whatever championship they contest, and are sure to be amongst the front-runners in GT Asia this year.”

Over recent seasons aai have made cameo appearances in the GT Asia Series, most famously last season with AMG Customer Racing with a two car Mercedes-AMG GT entry for the August Shanghai event, the debut in the region for the new Mercedes GT3 weapon, but aai have been more strongly associated with another leading German manufacturer, BMW.

“We’re proud to be returning to the GT Asia Series – a championship with it’s foundations firmly established in Asia – and bring a full compliment of drivers to go after the 2017 Team’s and Driver’s titles as we did with Motorsport Asia’s Asian Touring Car Series back in 2011,” aai Team Manager Mitoshi Kakimoto confirmed.

“Our plan will be to compete with three GT3 cars – two BMW M6 GT3s, and a single BMW Z4 GT3 – and one GT4 car, details of which we’ll reveal shortly. We have a strong driver lineup planned – that will also be revealed soon – with our sole focus being to claim the championship titles and show once more just how competitive our team is on the world stage.”

BMW have had a global resurgence in GT3 competition over the last 12-months, claiming victory in the grueling Spa 24-Hour race last year and they were recently amongst the pace-setters at the demanding Bathurst 12-Hour, so they can be expected to challenge the established stars of GT Asia with their mighty twin-turbo 4.4-litre V8 powered machines.

For aai Team Principal Jun San Chen, he admitted the team were relishing the chance to return to competitive sprint racing. “Coming from an endurance race oriented Asian Le Mans Series in the past years, it is of a pleasure to return back to sprint racing in GT Asia Series where every fraction of a second counts in determining who takes home the win. With this stated we would use our experiences in endurance racing and adjust our technique to achieve the most successful outcome for the team.”

The 2017 season gets underway in early March, with a two-day official test at Sepang International Circuit in Malaysia on 7-8 March, followed by the first two rounds of the season at the same venue on 10-12 March.

The GT Asia Series is sanctioned by the FIA as an International Series and is clearly recognised as the Region’s leading GT Championship. It is solely managed and promoted by Motorsport Asia Ltd and is backed by Michelin, KW Automotive, Motul and Race Room.