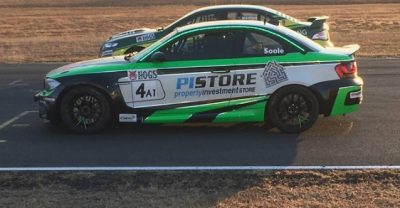 Highly experienced racing driver Andrew “Fishtail” Fisher has driven a superb stint in the 300KM Fight In The Night Race held at Queensland Raceway setting a quicker time during the night race at the Australian Production Car round at Queensland Raceway than the day time race on the Sunday – proving once and for all that fish do see better at night!

Andrew partnered with Anthony Soole in the Property Investment Store/Jesus Racing BMW M1 for the two 300 kilometre events. His best lap at night was a 1 minute 21 compared to 1:22 when the sun was shining. They crossed the line in sixth place in the Fight In The Night despite a mix-up with the safety car which saw them relegated to 11th on the track when were actually in seventh place.

Fishtail ‘drove the wheels off’ the Little Beamer to climb to sixth and was closing in on the Mercedes C63 which was only 23 seconds in front. They were the first of the 4 similar BMW’s to cross the line.

The day race run on the Sunday was interrupted by four safety car periods and the team did a great job both on the track and in the pits. There was lots of passing done over the cause of the 300KM race and the team managed to achieve another amazing result taking fifth outright from the field of 31 starters.

Andrew is staying on in Queensland to take his Life Choices presentation to Correctional Centres and High Schools, where he will be challenging young people about the importance of making good life decisions.