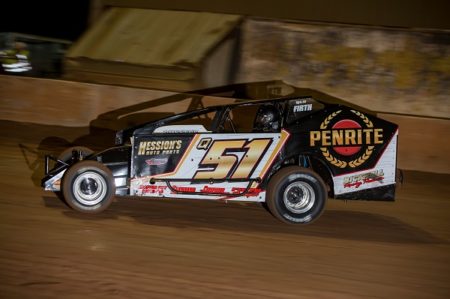 The Firth Motorsport team wrapped up their 2020-21 season campaign on the weekend at Hession’s Auto Parts Grafton Speedway, and they were able to finish it on a high, with team driver Andrew Firth coming away with the V8 Dirt Modified feature-race spoils.

In what was only his seventh appearance aboard his brand-new Bicknell car, Firth is beginning to get a better handle of his new machinery and it was no more evident than last Saturday’s performance on home soil at Grafton Speedway.

Firth couldn’t have asked for a better start to proceedings on Saturday afternoon, after he romped to victory in his opening heat race, and he then backed up that performance with a seventh-place finish from the back of the field in his final heat race.

By virtue of his impressive heat-race form, Firth started the feature race from pole position. From the drop of the green flag, he was able to make the most of his favourable starting position by powering to the lead. Once out in front, the Qld # 51 Penrite / Hession’s Auto Parts supported Bicknell driver went on to lead the entire 20-lap distance to claim what was a comfortable win.

“It was great to pick up the win in my last appearance of the season, and it certainly gives us something more to build on heading into next season,” expressed a jubilant Firth.

“Since stepping into the new Bicknell car earlier this year, the team and I have been working hard on coming to grips with the car, and there have been plenty of ups and downs when it comes to the car’s setup, but on Saturday, I feel we really turned a corner with being able to put together an entire race meeting by being fast from the beginning of the meeting through to the end.”

Apart from his Grafton Speedway season finale win, other highlights from Firth’s 2020-21 season campaign were a fourth-place finish in the 5 Star Dirt Series Grand Final at Dubbo’s Morris Park Speedway (NSW) earlier this month and another fourth-place finish during last month’s third 5 Star Dirt Series round, which doubled as the NSW Title, at Grafton Speedway.

Firth’s team-mate and daughter Taylah Firth enjoyed an encouraging third full season in the V8 Dirt Modified ranks. Running in the ‘Sportsman’ category, the 21-year-old has spent the season just gone being able to consistently run with the category’s leading contenders and her confidence continues to grow with the more track time she gains. The highlight to come out of the season for the Qld # 15 Penrite / Hession’s Auto Parts supported Bicknell racer was being able to record a heat-race placing earlier this month at Maryborough Speedway, where she managed to finish ahead of a handful of ‘Open’ competitors, which included current and five-time Australian Champion Kevin Britten.

When it comes to their 2021-22 season plans, the Firth Motorsport team plans are already locked in, and it’s going to consist of the father-and-daughter combination contesting the majority of blue-ribbon events, including the full 5 Star Dirt Series schedule, on the calendar around the country. For the major events, Andrew will be running in the ‘Open’ category but will revert to the CT525 Crate experiment engine for the other domestic race meetings. Taylah is going to continue to run in the ‘Sportsman’ category.

The Firth Motorsport team would like to thank their 2020-21 season sponsors: