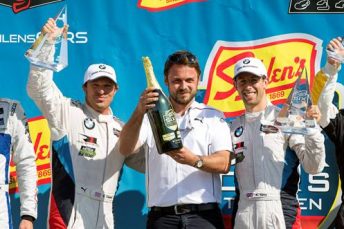 Alexander Sims claimed his first sports car victory in North America this weekend. The Cambridgeshire driver and his BMW Team RLL team-mate Bill Auberlen competed in the IMSA WeatherTech SportsCar Championship Sahlen’s Six Hours of The Glen on 2 July 2017, securing the top step on the podium in the No. 25 BMW M6 GTLM.

At the Watkins Glen International circuit, New York, Sims set a fastest lap time of 1:42.813 during qualifying to secure second place on the grid, his season-best qualifying position so far in the WeatherTech SportsCar series.

Sims started the six-hour race and was quick off the line, jumping into the lead and opening a three-second gap from the rest of the field. Sims led the race in the BMW M6 GTLM for a double stint, pitting on lap 59 during the first caution of the race and handing over to Auberlen who continued to lead the field.

As the mid-point of the six-hour race approached, Auberlen was caught in a five-car battle after a caution period and slipped back to fourth place. However, after an incident for a Porsche up ahead brought out another yellow flag, he was back in contention and took the lead when the race restarted on lap 107. The No. 24 sister BMW Team RLL car passed for first place on the next lap with the duo staying in this formation until the next pit stops.

Sims took over control of the No. 25 BMW M6 GTLM, re-joining the field in seventh place. Following his final pit-stop, he was running sixth as he started the last stint of the race. Sims pushed forward and was up to second place as the rest of the GTLM field made their pit stops. A final caution period helped the team’s fuel strategy and at the restart Sims took the lead and opened a gap, charging to cross the line first and take the BMW M6 GTLM’s maiden victory.

“We really earned this win,” says Sims. “It was such a close race with an incredible field of drivers and cars. I think it makes it even more special knowing the quality of the field when you get a result like this. We’ve tested at Watkins Glen before and that helped me find my feet; I really love this place. I felt very comfortable coming into this weekend and knew we had a good package. The race threw up some unique challenges and we had to deal with tyre and fuel management, so that last yellow flag was important and made sure we got to the end. Everything fell into place and BMW Team RLL did a fantastic job; they really nailed the M6 set-up this weekend.

“I think we’ve built momentum throughout the season and we have the car working really well so we’ve got to keep on doing our job, having flawless races and hoping that things swing our way. In such a competitive field like this you need to maintain your momentum but you also need luck on your side, so fingers crossed this continues for us.”

Sims is next out on track for the Mobil 1 SportsCar Grand Prix, held at the Canadian Tire Motorsport Park on 7-9 July 2017.