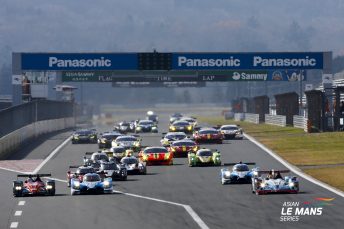 Three months before the start of the 2017/18 Asian Le Mans Series season, the first four entries – three in LMP2 and the first in the GT class – have already been received.

2016/17 LMP2 Champions, Algarve Pro Racing were among the first of a flurry of teams to confirm their entries in the new season. The team has confirmed they will be returning to the LMP2 class with a Ligier that will be driven by Dutch driver Ate de Jong and Korean driver Tack Sung Kim. As a result of winning the 2016/17 Championship, the team received an invitation to race at the 24 Hours of Le Mans – an invitation they took up in June this year.

Joining them in the LMP2 class will be ARC Bratislava. The Slovak team came second in the LMP3 class of the 2016/17 Asian Le Mans Series with their #4 Ginetta LMP3. This year has already seen the team make the step up from the LMP3 Class in Asia, to LMP2 at the 24 Hours of Le Mans.

For the 2017/18 Asian Le Mans Series, ARC Bratislava will race a Ligier JSP2 that was previously owned by Krohn Racing. Miro Konopka will again be behind the wheel and he will be joined by two other drivers that will be confirmed at a later date.

Team BBT, and driver Anthony Liu, have confirmed they will make the step up from GT racing into prototype racing for the 2017/18 season. The team finished 3rd in the GT Class in the 2016/1 Asian Le Mans Series, racing the #37 Ferrari 488 GT3.

After spending seven years racing in the GT class, Team BBT will, for the first time, run a Ligier JSP2 in the LMP2 class for the 2017/18 season, and will again receive support from AF Corse. They will run with a yet to be confirmed pro driver racing alongside Liu.

Spirit of Race were the first GT team to get their entry in for the 2017/18 season. Nasrat Muzayyin and FIA gold rated driver, Rui Aguas will once again join forces behind the wheel of the Team’s Ferrari 488 GT3.

The Team finished 5th in the 2016/17 Championship, and joined Algarve Pro Racing and ARC Bratislava, in this year’s 24 Hours of Le Mans. The trio were part of a strong contingent of teams that had raced previously in the Asian Le Mans Series.

These entries are a clear indication of the strong interest already being shown by teams and drivers in the Asian Le Mans Series. The interest in part is thanks to the ACO Series demonstrating that it is a strong stepping stone into the 24 Hours of Le Mans and the World Endurance Championship.