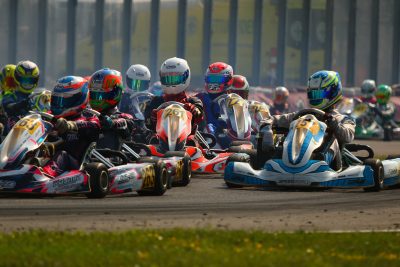 Hot, hotter, and even hotter – was the theme of the third round of the Rotax MAX Challenge Euro Trophy from August 3rd to 5th in Austria, where blistering heat put the many participants and their equipment to the test. The equally hot competition on the 1,180metre Speedworld circuit made for lots of sweaty race action and thrilling fights, peaking Sunday afternoon with some new and worthy winners.

Junior Mads Riis (RS Competition) was in brilliant shape in Bruck. The Dane set the pace right from the beginning and by 42.704 seconds also clearly set the fastest time in qualifying. Afterwards, the youngster won both heats and gained the best starting position for the first final. Here, the Tony Kart pilot proved his excellent performance, again taking the victory ahead of the Australian James Wharton (FA Kart) and championship leader Mike van Vugt (JJ Racing) from the Netherlands.

The latter struck back impressively in the second final. Mike van Vugt secured his second win of the season and by collecting maximum points, won the championship in the Junior MAX category. Besides the newly-crowned champion, Mads Riis had reason to cheer as well; the Dane saw the chequered flag in second position to win the daily classification of the Austrian round. Behind him, Mike van Vugt climbed onto the podium in second place while James Wharton completed the results in third position.

The 32-driver grid in Senior MAX delivered a thrilling competition! In the qualifying phase it was difficult to spot a favorite; the Dane Mikkel Tygesen (KMS Europe KFT) was fastest in qualifying, but after the heats he had to hand pole positon for Final 1 to Finland’s Lauri Leppä (Tony Kart). On Sunday, the order changed again and Lukas Wanner (KSB Racing Team) took control. The local Austrian hero was unbeatable and took a double victory on home soil. Consequently, the Kosmic driver topped the daily ranking, while Lauri Leppä ended the weekend in second place. Dutchman Mick Nolten (GKS Lemmens Power) prevailed in the fight for third place on the podium just ahead of the Czech Sebastien Belhocine (Strnadel Motorsport). Therefore, Nolten was able to extend his lead in the championship and now has the best chance for the title at the big season finale next month.

Daniel Machacek (Team VPDR) turned on a superb performance in Bruck. During his home round of the series, the Austrian left nothing to chance; he set the quickest time in qualifying, won all his heats and both finals to convincingly secure the victory in the Rotax DD2 class. Behind him, Martin Henckel Mortensen (RS Competition) took P3 and P2 in the finals, finishing second in the daily ranking just ahead of Slovenian entry Xen de Ruwe (AKK Sportstil). Mortensen was also rewarded with a nice surprise – considering the dropped points in the standings – as the Dane lies uncatchable at the top of the championship ladder, allowing him to celebrate the title win before the showdown in Wackersdorf.

The Rotax MAX Challenge Euro Trophy now heads to Germany on September 28th to 30th. The last edition of the four-round series hosted by ProKart Raceland at Wackersdorf will not only reveal the 2018 champions, but also award the qualified drivers with their personal invitation tickets to compete at the Rotax MAX Challenge Grand Finals in Brazil (November 24th to December 1st).

BRP-Rotax GmbH & Co KG, a subsidiary of BRP Inc., located in Gunskirchen, Austria is a leader in the development and production of innovative 4- and 2-stroke high performance Rotax engines for BRP products such as Ski-Doo and Lynx snowmobiles, Sea-Doo watercraft, Can-Am all-terrain, side-by-side vehicles and Can-Am Spyder lineup as well for motorcycles, karts, ultra-light and light aircraft. In the last 50 years, the company has developed more than 350 engine models for recreational vehicles and produced
over 7 million engines.
www.rotax.com
www.rotax-kart.com

We are a global leader in the world of powersports vehicles and propulsion systems built on over 75 years of ingenuity and intensive consumer focus. Our portfolio of industry-leading and distinctive products includes Ski-Doo and Lynx snowmobiles, Sea-Doo watercraft, Can-Am onand off-road vehicles, Alumacraft boats, Evinrude and Rotax marine propulsion systems as well as Rotax engines for karts, motorcycles and recreational aircraft. We support our lines of product with a dedicated parts, accessories
and clothing business to fully enhance your riding experience. With annual sales of CA$4.5 billion from over 100 countries, our global workforce is made up of around 10,000 driven, resourceful people. www.brp.com