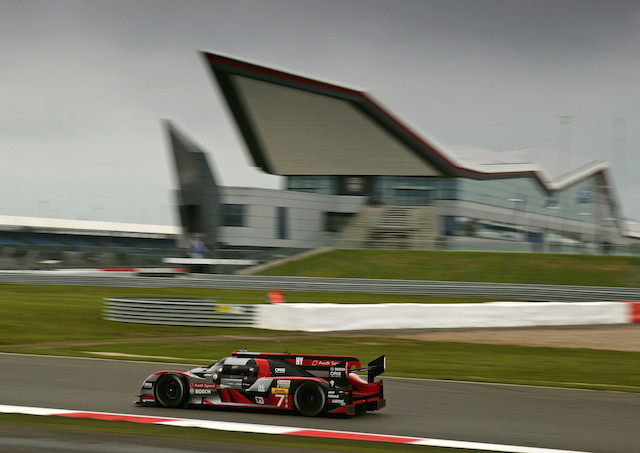 MEDIA RELEASE: Benoit Treluyer and his Audi Sport team-mates Marcel Fassler and Andre Lotterer found the answers they were looking for at the recent 6 Hours of Silverstone, the opening round of the 2016 FIA World Endurance Championship, where their strong showing laid a very promising foundation for the upcoming campaign.

As Benoit looked back on his performance at the Home of British Motorsport, there wasn’t any bitterness in his voice, only satisfaction and determination. Of course, Treluyer felt slightly disappointed when he heard about the post-race exclusion, but he was already looking ahead to the future.

“Regardless of what happened, Silverstone will remain a very good weekend for us,” Benoit said proudly. “We weren’t worried ahead of the first round, but we didn’t really know how we’d stack up against Porsche – we thought they’d be a bit quicker.

“We didn’t do great in wet conditions during practice and we hadn’t specifically set up the car for this kind of weather. So in qualifying we just went for it, and Andre and Marcel claimed pole ahead of the sister #8 Audi R18 of Duval, Di Grassi and Jarvis!”

Simply reminiscing about that all-Audi front row brought a joyful smile to Benoit’s face, but that was just the beginning.

“Andre pulled away as soon as Sunday’s race got underway,” the 2012 world champion continued.

“We then slipped back behind but that was only due to differences in tyre strategy and a slightly lengthy first pit stop. After taking over from Andre my stints were pretty solid and the tyre changes got better and better as the race unfolded. The mechanics just keep progressing; a lot of the guys are still young but their work is first class, so hats off to them!

“I hadn’t driven that much before my first spell behind the wheel, so I needed to mark my on-track reference points. I made a slight mistake by entering a corner too fast. I spun and lost a bit of time there as a result, but I managed to get going again and climbed back through the order. Then came the full course yellow after the #1 Porsche’s accident.

“Tyre pressures dropped quite a lot at that point, so once the race resumed I really had to push to take the lead and try to open a gap to the #2 Porsche.”

At that time, though, all Benoit focused on was bringing the car home to take the chequered flag and enjoy the podium ceremony. The post-race exclusion announcement came later, and whilst there was disappointment among the team satisfaction clearly won them over.

“We’re all very happy to have pushed and all the while staying clear of the numerous pitfalls. Regardless of what happened after the race, it’s a great way to kick-start our campaign,” Benoit insisted.

“I may be leaving Silverstone without any points, but I’ll remember feeling all the emotions I always seek in any race weekend. I’m also confident that the season is going to be great; we were quick right off the bat, with a brand new car that we’re not 100% familiar with yet, and which still has a lot of room for improvement.

“What’s more, we’ve worried people at Porsche. They knew we would be competitive at some point during the season, but perhaps they didn’t expect it to happen so soon!

And it was such a pleasure to drive a car with plenty of mechanical grip and much improved aerodynamics. And let’s not forget our hybrid system, which already works very well. In short, when everything is at 100percent our Audi R18 will be pretty mighty.”

Benoit and his friends have already set their sights on the WEC 6 Hours of Spa-Francorchamps, which takes place on May 5-7. Revenge will certainly be on the cards for the triple Le Mans winners at round two of the FIA WEC.