Fired up Boschung charges from 15th to third at Lausitzring

Fired up Boschung charges from 15th to third at Lausitzring 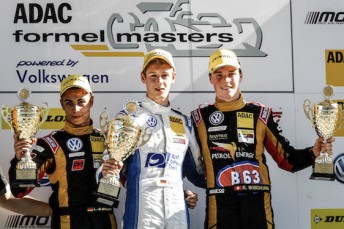 After a steady opening race and largely frustrating second, Ralph Boschung rebounded on Sundayafternoon with a storming comeback drive during round three of this season’s ADAC Formel Masters (May 23-25).

After first incurring a drive-through penalty and then failing to finish Sunday morning’s race, the 16-year-old Swiss was forced to start the afternoon’s contest from 15th and last. But he would channel his frustration into controlled aggression and make amends with a stunning display of overtaking and racecraft that resulted in his third podium finish of the season.
The Lotus driver had already picked up two places by the time he exited turn one, and went on to overtake 10 more cars – including three in one corner – over the first five laps alone. By the time he was third the top two had already pulled clear, but Boschung continued to charge and eventually finished just 4.4secs behind the winner having set fastest race lap.
Having finished third in Friday’s free practice hopes were high ahead of qualifying, before a mistake scuppered his chances of lining up at the front.
Indeed, he would start only eighth for the weekend’s opening race on Saturday afternoon when a battling drive helped him climb to fifth by the chequered flag and come home as the highest placed Lotus driver.
Race two on Sunday morning would prove far less straightforward, though. Having started seventh, Boschung was already up to fourth and challenging for third when he was awarded a drive-through penalty for disobeying track limits at turn seven. He wasn’t the only one to be punished as several other drivers received similar sanctions for the very same reason.
With his race effectively over, Boschung chose to save the car for the weekend’s final race that afternoon when his understandable irritation manifested itself as one of the drives of the season thus far.
“It’s been a rollercoaster weekend so I’m delighted to come away with a podium finish after what happened in race two,” said Boschung. “Overtaking so many cars on-track felt incredible and to come away with a podium alongside my two Lotus team-mates was the icing on the cake. I squeezed absolutely everything out of the car and myself. There was nothing left on the table. I’m glad I was able to turn my frustration into a positive and end the weekend on a high note.
“We changed a few things on Friday, but actually went the wrong way on set-up and struggled in qualifying. To be honest I made a mistake as well which didn’t help, but the car still wasn’t quite right for race one. I don’t like finishing fifth but in the circumstances it was another gutsy effort. And we looked odds-on to do something similar in race two before the penalty.
“As always I’d like to thank my partners Petrol Energy, B63, Hublot, Avanthay&Partners, and Audi for their continued support. It means a lot and hopefully we can bring everything together at the next race.”
Round four of ADAC Formel Masters takes place at the Red Bull Ring in Austria on June 6-8.