Finke, Event of the Year at the CAMS Motorsport Awards

Finke, Event of the Year at the CAMS Motorsport Awards 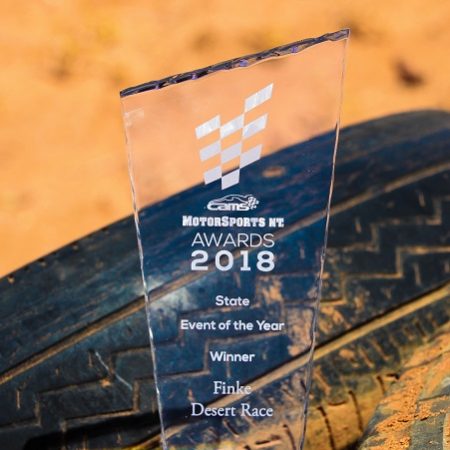 At a gala awards ceremony held in Darwin, attended by over 200 representatives of the Northern Territory motorsport industry, the Finke Desert Race club were honoured to receive the coveted award.

The Finke Desert Race Club was also recognised with the ‘Club Milestone Award’, celebrating 30 years partnership with the Confederation of Australian Motorsports.

The 2018 Tatts Finke Desert Race was the best attended Finke in recorded history.

As the only remaining off-road race in Australia catering to both cars and bikes, the Finke Desert Race Club works hard to ensure that both groups of competitors are well looked after and get a great experience.

2018 saw almost 900 competitors taking part, with thousands of crew and supporters joining them for the race weekend. More than 80% of competitors come to Alice Springs from interstate. In real terms, this injects an estimated $7m into the Alice Springs and Northern Territory economy.

2018 was a year of firsts for the club, who continually look to push the event to the next level. Some of these included the introduction of a ‘Street Party & Night Markets’ (attracting 5,000 people to the main streets of the Alice Springs CBD), Live Streaming from the remote community of Aputula (Finke) to a world audience and the trialling of GPS tracking on competitors to name a few.

The event, which began as a small local motorcycle race in 1976 with 56 competitors is now often referred to as Australia’s Dakar. With 15,000 spectators along the 226km course and an online audience of 85,000 Facebook Followers, there were almost 800,000 views of a live steam of the event. We have a global audience.

The 2018 Tatts Finke Desert Race was also recognised at the Brolga Tourism Awards in November this year, with a highly commended placing in the Events and Festivals category, along with winning the Australia Day Award in Central Australia for ‘Event of the Year’ in January.

The 2019 Tatts Finke Desert Race will be held in Alice Springs on the Queens Birthday weekend from 6-10 June 2019.