Fine dining takes the lead in the Formula One Paddock Club 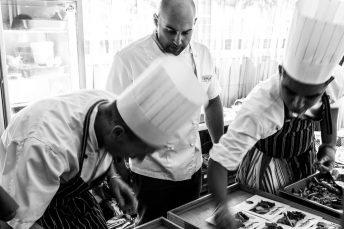 The Paddock Club will feature many of Melbourne’s best chefs

MEDIA RELEASE: The guests in the Formula One Paddock Club™ at the 2017 Formula 1® Rolex Australian Grand Prix will have their culinary senses ignited by the city’s top chefs with personalised menus across the four-day event.

“Guests in the Formula One Paddock Club™ love their Formula One but they are there for the entire event experience; the world class food, the premium drinks, the atmosphere, the networking – this is where it all happens,” Westacott said.

“The Chef’s Collective is an incredibly exciting new offering for corporate guests and is the cherry on top of the ultimate Formula One experience. Melbourne is the country’s sporting and culinary capital so it makes perfect sense to have the two so aligned at the 2017 Formula 1® Rolex Australian Grand Prix.”

“You’d be hard pressed to find a more collective array of the big players at a sporting event. To have the likes of Ben, Shane, Guy, Victor, Darren and Jacques all working together on one event is sensational,” Haigh said.

“Guests will also have the chance to get up close and personal with the chefs who will have a presence in the Formula One Paddock Club™ suites throughout the four days, adding an exciting new dimension to the event experience.”

Daily menus in the Formula One Paddock Club™ suites will feature at least one menu item from each chef, with a carefully curated support menu created by PRC.

Quotes from the Chef’s Collective:

Benjamin Cooper (Chin Chin)
“Where else in the world do you get the very best in food and wine, the biggest international sporting events, and a wonderfully diverse culture right at your fingertips? I love everything about Melbourne and can’t wait to be part of the 2017 Formula 1® Rolex Australian Grand Prix.”

Shane Delia (Maha)
“This is the 4th year that I’ve been involved with the Formula 1® Australian Grand Prix and each year keeps getting better and better. The event organisers continue to raise the bar from a hospitality perspective and the Chef’s Collective is just another example of this. Guests are in for a real treat.”

Guy Grossi (Grossi Florentino)
“I’m a massive F1 fan through and through so I can’t wait to soak in all of the Formula One action and keep the fans fuelled up in the Formula One Paddock Club™! With my ongoing collaborations with Peter Rowland Catering we know this one is going to be extra special.”

Victor Liong (Lee Ho Fook)
“Where else would you want to be in March in Melbourne? There’s always such a great energy in the city and I really look forward to being right amongst the action at the Albert Park Grand Prix Circuit and bringing some on-trend fine dining to guests.”

Darren Purchese (Burch & Purchese)
“It’s a real privilege to be part of the Chef’s Collective team and working with Peter Rowland Catering. I really look forward to getting to know the fans in the Formula One Paddock Club™ – and hopefully catch a few laps from the best seat in the house!”

Jacques Reymond
“The Formula 1® Australian Grand Prix is such an important sporting event to this city, so why not enjoy it over a delicious meal and a glass of wine? Sport and fine dining – a match made in heaven.”