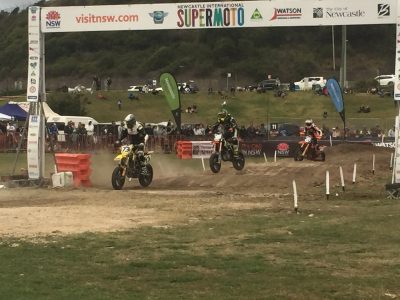 There was significant hype for the FIM Oceania Newcastle International Supermoto featuring the Australian Supermoto Championship and the event lived up to the expectations! The famous Father’s Day meeting was all about German star, Markus Class who defended his Australian title in style and claimed the Oceania Championship.

The weekend was packed with non-stop racing action and a host of talented names battled it out. The event was livestreamed throughout the world and broadcast nationally on SBS Speedweek, Fox Sports Australia, Fox Sports Asia, Motors TV in Europe and MAVTV to the USA, Canada and Mexico.

The Australian Pro Supermoto Championship was the primary focus on Saturday and Markus Class (75 Points) defended his championship in dominant style. He took all three race victories, ahead of Ben Attard and Damon Gibbons. He is one of the world’s best Supermoto riders and he lived up to his pedigree. As a result, he reclaimed the Australian Supermoto Pro Championship after demolition in the West, one year ago.

In the FIM Oceania Supermoto Championship, Class (75 points) had the perfect weekend to secure another three races. His greatest opponents were five-time US Champion, Gage McAllister and 12-time national motocross winner, Craig Anderson. He adapted his riding to the Newcastle Foreshore track with ease and coasted to victory.

Class commenting after securing his championships; “The weekend at Newcastle is very different compared to WA last year. With a city venue, it makes for a new kind of challenge. I managed to take victories in all races and it was a fantastic experience. Maybe we can return next year to defend our championship.”

Over in the Australian Supermoto Open Championship, it was the Andy McLeish show as he also completed a clean sweep with 75 points. The Sunshine Coast rider finished ahead of Steeve Jeoffrion and Jack Douglas. McLeish sharing; “It was an awesome weekend here and a great event as it always is. I’m thrilled to finish on top for the Open Class and I would like to thank all my sponsors for their support.”

For the Australian Women’s Championship, Meghan Rutledge from NSW was on fire, also taking out three race victories on route to her title win. She finished ahead of Lahrra Cloak and Keegan Pickering in the standings. Rutledge commenting; “The track held up really well throughout the weekend. I’ve never ridden on tar before in wet conditions so that was interesting. Looking forward to coming back next year!”

The Australian Junior 250cc Supermoto Championships was thrilling and coming out on top was young prodigy John Lytras from Queensland, ahead of Kodi Stephens and Ryder Dray. Lytras saying; “It was really good fun and I’m so glad to get the win. It was a tough weekend with all the competition in this class. This is now my seventh Australian championship.”

For the Australian Junior Lites Supermoto Championship, the spoils of victory went to Harrison Voight who took all three race wins. “This my first Australian Championship,” said Voight. “I ride in flat track, road racing and motorcross. Now we look towards ASBK at Winton next weekend!”

Riders were overwhelmingly positive about the return to the Foreshore for 2018 and the running of the event itself. With a large global audience watching the livestream and strong attendance, it was a great weekend overall.