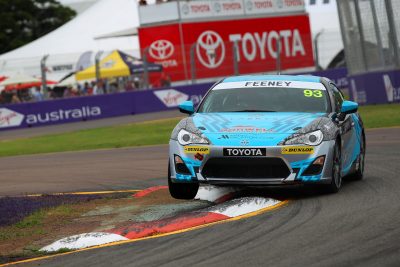 The Gold Coaster showed maturity in moving his way forward during the three races across the weekend after qualifying for the first race in 16th position yesterday.

His preparation was compromised with a CV joint failure in the driveshaft in Friday’ssecond practice, costing the 15-year-old a critical session on his first visit to the Townsville circuit.

His efforts throughout the weekend saw him make more places than just about any other driver.

He advanced to 11th position in Saturday’s first race, before getting up to eighth in the second race and then the top five came this afternoon.

This placed him eighth on points overall for the weekend and sees him move into the top 10 of the overall Series standings.

The next assignment for Feeney will be in two weeks’ time at the fourth round of the SP Tools Australian Kart Championship at Emerald, Queensland.

The next round of the Toyota 86 Racing Series will be August 24-26 at the all new The Bend Motorsport Park in South Australia. Feeney took part in a recent South Australian state event to learn the circuit configuration the Virgin Australia Supercars Championship will use there.

“What a great feeling to score my first top five in Toyota 86 on this incredible Townsville circuit,” said Feeney.

“Missing the second session on Friday really cost us, as being first category out on the circuit on Friday morning, we were effectively the track cleaners – so with some Supercars rubber down, the characteristic of the circuit was completely different come qualifying on Saturday.

“We started a bit further down in the first race than I would have liked, as after the first session I felt as though we had the pace to be right up the front in qualifying, so made it a bit difficult for myself – but it was a good challenge and we were able to start moving forward.

“The second race, I got shuffled back a bit off the start but was able to push forward and get into the top 10 and then the final race was just awesome.

“I had a good battle with Ben Grice, who knows his way around these cars and is a tough racer then to catch Crick at the end and get through on him on the last corner, last lap and get the top five to boot was pretty cool.

“I can’t thank everyone enough for their support – we’ve got a great group of supporters and we’ve been repaying them as best we can through the results and how we represent them at the track and through the television coverage.

“Bring on The Bend – hopefully we can continue the forward momentum and keep pushing up the points ladder!”