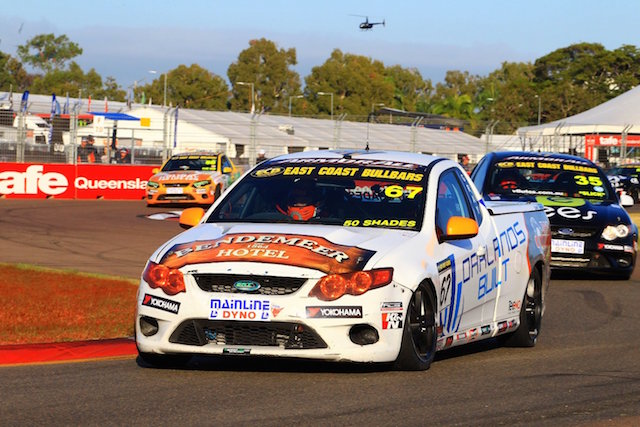 MEDIA RELEASE: V8 Ute Driver Jeremy “Fifty Shades of” Gray didn’t fall into car racing at a young age like most of his counterparts.

Instead, he worked his way into the sport in a roundabout way through the influences of family and friends, and whilst he works on his 10year old son’s bike on his 130acre property in Denman, just outside of Muswellbrook, he talks about his many loves, motorsport and racing in the 2015 East Coast Bullbars Australian V8 Ute Racing Series.

Gray stepped into V8 Ute Racing in his thirties, after an impressive career on two-wheels. His now mechanic and friend David Ellis recommended he try car racing and after a stint with Andrew Miedecke in the 2010 Bathurst 12hour, the Touring Car legend convinced him to try Ute Racing. On debut Gray stood on podium in the Ten Years of Legends Race, alongside co-driver George Miedecke at the 2010 Clipsal 500.

“Dave (Ellis) did the Hill climbs he let me have a few goes and I loved it, we just started in State production car racing. Then I drove with Andrew Miedecke in the 2010 12hour, he suggested I should have a go in Utes as George was leaving for the states. We ran the ute for a few years ourselves, and then joined Tinkler Motorsports, I had a good relationship with Nathan (Tinkler), as we use to play Rugby League together, a few years ago we moved to Sieders Racing Team and Dave my mechanic has stayed with me the whole time. 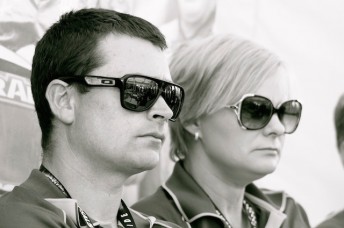 “We are a big family, Michelle (wife) and Dave travel the country together, Dave and Michelle get more nervous than I do, and put a lot into it as well,” explained Gray.

His wife Michelle has been involved in his racing through his entire career and travels to all of the V8 Ute Rounds and is Gray’s ears when he is on-track.

“Michelle is really good with the engineering side, she makes sure all ride heights are spot on and when I did production cars Michelle was also involved in all that,” said Gray.

Gray had a passion for racing since he was an early teen and to his father’s distaste was lucky enough to be gifted a motorbike by his mother. His Dad, who was against the initial expenditure on a bike, soon fell in love with it and Father and Son started racing together.

A fitter and mechanist by trade, Jeremy isn’t just successful on the track but also off, he owns JMG Maintenance, a company he started 12 years ago, which now has up to 70 employees at a time. He also recently purchased The Bendemeer Hotel just outside of Tamworth and in his spare time works on building motocross courses for his two boys and moves his 30 cows around their 130acre property.

Gray still races his motorcycle, but his main racing passion is with the East Coast Bullbars Australian V8 Ute Racing Series. He has won races over the years but would love to win a round and stand on the podium; he’s just after some consistency in his racing.

“I’d love to get that elusive Podium win and be consistently up the front more, just be a pest to these younger guys, Ryal (Harris), George (Miedecke) and Kris (Walton) pretty much all my fellow Ford drivers.”

“I’ve put so much effort into my driving this year not just car set-up and the way I drive. The hard part in this category is maintaining it, Kris, Ryal and David (Sieders) are unbelievable drivers, they’ve always done karting and car racing, and here I am trying to be competitive at an old age, it’s challenging and I enjoy that,” said Gray.

Gray will hit the track for Round 5 of the 2015 East Coast Bullbars Australian V8 Ute Racing Series at Sandown Raceway, 11 – 13 September to try and walk away with his elusive podium win.