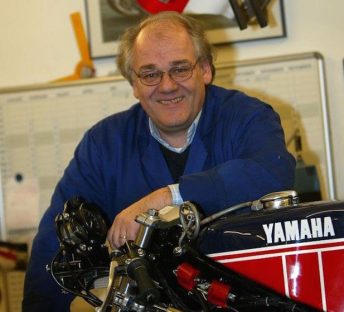 MEDIA RELEASE: Ferry Brouwer, the founder of Arai Europe, will be a special guest at the 2017 AMCN Island Classic from January 27-29.

The Dutchman will be interviewed at the Phillip Island Grand Prix Circuit by renowned motorcycle scribe Alan Cathcart, touching on not only his dogged determination in setting up a European base for the legendary Japanese Arai helmet, but also his days as a race technician for Yamaha where he was a spanner man for a host of top GP riders.

In fact, a major part of Brouwer’s inspiration for lifting the standards of safety in motorcycle racing came when he was a mechanic to Finn Jarno Saarinen, who lost his life because part of his face was ripped off in a crash in 1973.

Brouwer eventually found an outlet for that passion when he became intrigued by the Arai logo. That was in 1980, and two years later – after an initial flat rejection by Mr Arai – he was the European importer for Arai.

Since his retirement, Brouwer has been overseeing Yamaha’s vintage race bike fleet, and a book has also been released about him titled ‘That Boy – What became of Ferry Brouwer’.

The other special guests at the 2017 Island Classic, the largest classic motorcycle event in Australia, are New Zealander Andrew Stroud and the awesome Britten V1000 race bike.