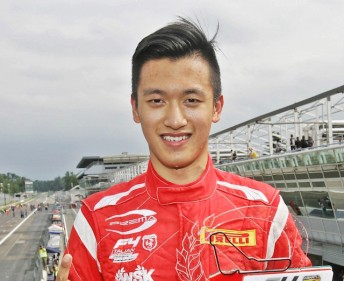 MEDIA RELEASE: Ferrari, the most famous team in Formula 1 motor racing is sending its latest protégé from the Ferrari Driver Academy, Guanyu Zhou, here for this summer’s Toyota Racing Series which starts at Ruapuna Park, Christchurch on January 16 and 17.

Zhou has just finished runner-up in the Italian Formula Four Championship in his first taste of single seater racing, with three wins and 12 podium placings.

The 16 year old has been based in London for the last three years, furthering his motorsport career after starting kart racing in China as an eight year old.

It is the second year in a row the Ferrari Academy has sent one of its young FDA drivers to compete in the Toyota Racing Series.

At the start of this year Canadian Lance Stroll arrived in New Zealand as the 2014 Italian Formula Four Champion. Five weeks later he had added the 2015 Toyota Racing Series title to his career CV after winning four races and finishing on the podium 10 times.

“As we decided last year with the winner of the series Lance Stroll, again in 2016 one of the drivers from the Ferrari Driver Academy will participate in TRS,” said Luca Baldisserri, who runs the FDA and who used to be seven times World Formula One Champion Michael Schumacher’s race engineer.

“We are certain that testing and racing is the best training method to achieve the best results. This series perfectly suits motorsport training during the winter weather of the European off season”

“TRS is an impeccable organization and a fantastic environment,” said Mr. Baldisserri. “It’s a fun and professional competition. As it was for Stroll I hope Joe’s training will be enriched from this experience”

Zhou has been on Ferrari’s books since June 2014, his final year of Karting when he finished runner-up in the Rotax Senior Euro Challenge and the Rotax Max Senior Winter Cup. In 2013 Zhou won the Junior Rotax European Championship.

Zhou’s car will be prepared by the Hamilton based M2 Competition team which guided Stroll to his Toyota Racing Series success last summer.

The series is expected to attract drivers from at least 10 different countries, all of whom see the racing as an ideal way to prepare for racing in the northern hemisphere in 2016.