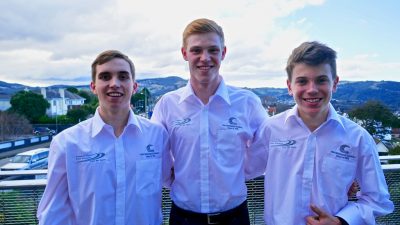 Callum Crawley, aged 17 of Feilding, has topped the points-table at the Elite Motorsport Academy’s intensive training camp at Dunedin. Second in a close-fought assessment was Peter Vodanovich, also 17, of Auckland, with 15-year-old Billy Frazer, of Pukekohe, third.

Crawley, Vodanovich and Frazer are part of a group of eight young race drivers participating in this year’s New Zealand Elite Motorsport Academy, which is run by the MotorSport New Zealand Scholarship Trust in conjunction with the Otago Academy of Sport and the Human Performance Centre from the University of Otago’s School of Physical Education.

The class of 2018, which hail from Auckland, Taranaki, Manawatu and Christchurch, marks the 15th group to go through the Elite Motorsport Academy, a year-long programme which commences with the intensive camp week. The Academy’s purpose is to help participants learn a wide array of skills and techniques to aid their mental and physical fitness as a motorsport competitor, as well as the sponsorship and marketing, nutrition and media skills needed to succeed in the sport. Each participant now continues with a tailored, 12-month follow-up package and specialised coaches to help them build on the skills and knowledge learned at the Academy camp.

With his camp-week success, Crawley will now aim to win the Ian Snellgrove trophy, which is presented to the overall winner of the 2018 Elite Motorsport Academy at next year’s MotorSport New Zealand annual awards dinner. First, he will have to continue to do better than his classmates in the post-camp assessments in order to take home the trophy which is awarded in memory of long-time MotorSport New Zealand general manager and Academy programme trustee, the late Ian Snellgrove.

Crawley secured his first-ever national title this past summer, winning the 2017-18 New Zealand Formula First Championship. He says among the many things learned during the mentally and physically challenging week with the Academy’s tutors, how best to prepare before a race meeting is one of the most important. “I think personal preparation is going to be really key for me. Just seeing the massive effect that it can have on your performance on the day and in the races, and how your prep starts with your nutrition – I learnt that what you’re eating up to four days prior can affect you on race day.”

The Manawatu Car Club member and Palmerston North Boys High School student adds: “The other things I really enjoyed during the camp were the race simulators and the heat chamber, and see the impact on your body. It really surprised me to learn how physical it is, like how high your heartrate gets and your core temperature.”

Like his classmates, Crawley agrees the Academy was an extremely positive and productive experience. “Absolutely there will be changes in me going into the new season as a result of the Academy – I’m going to be stronger, faster, fitter and better prepared.”

Wayne Christie, MotorSport NZ President and a trustee of the MotorSport NZ Scholarship Trust, says it’s been another great year for the sport at the Academy camp. “With the Academy now 15 years old, it is wonderful to see the talent we have within our sport. My thanks go out to the Otago Academy of Sport and our own scholarship trustees for the ongoing work they all do over the week and each year.”

Fellow trustee David Turner says it was a very hard-fought week from all eight drivers. “As in previous years, we have seen some great friendships established between participants that will be reflected both on and off the track in the years ahead. The entire group gave all we could ask of them during the week and, as a trust, we are very proud of the efforts they put in. We look forward to seeing the paths they take next season and their future motorsport careers.”

Michael Coutts, from the Otago Academy of Sport, fulfils the role of camp leader and he enjoys meeting a new group of motorsport-focussed athletes. “It’s awesome to see them learn so much outside of the car, and hopefully give them some tools and expertise to then put into action the following season of racing. The Otago Academy of Sport helps athletes from all sorts of sports, including snow sports. Having these guys come down each year is exciting. It’s full-on week for them and also gives us the opportunity to showcase the amazing providers we have in this region and to share their expertise with these young up-and-coming athletes.”

The full class of the 2018 New Zealand Elite Motorsport Academy is:

New Zealand’s Elite Motorsport Academy first ran in 2004 with race drivers Nelson Hartley, Christina Orr, Chris Pither and Tim Edgell among the selected participants that year. Since then, many academy graduates have forged successful international careers such as Shane van Gisbergen, Brendon Hartley, Hayden Paddon, Earl Bamber and Mitch Evans. Other national motorsport governing bodies have consulted the MotorSport New Zealand Scholarship Trust on the programme’s format and goals to assist the development of their own driver development programmes.