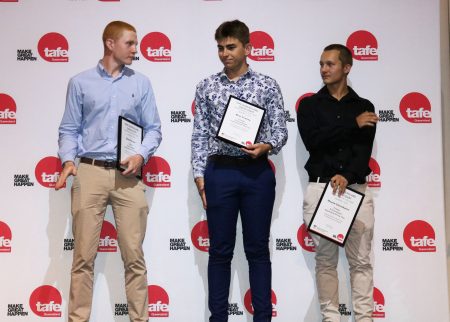 Broc Feeney has ended a stellar 2018 with major awards for his efforts on the racetrack and at school.

After finishing sixth in the 2018 Toyota 86 Racing Series despite missing a round due to being too young to race at Bathurst, the Gold Coaster took out the Most Unbreakable Performance for his win at Sandown – his two wins seeing him become the youngest driver in Toyota 86 Racing Series history to win a race – and the Publicity Star Award for his efforts in promoting himself and the all-Toyota Series.

Both Awards carried $1,000 Gift Cards with them. The sixth place in the Toyota 86 Racing Series earned Feeney $4,000 in prizemoney.

Then this week, he backed that up by being awarded runner up in TAFE Queensland’s Schools-based Apprenticeship Apprentice of the Year Award, recognising the 16-year-old’s vocational studies.

TAFE Queensland has regularly recognised Broc’s racing efforts throughout 2018 and have used his media profile through racing extensively to promote its school-based vocational training offering to potential students.

“It has been a whirlwind week to be honest,” said Feeney. “To be honoured in these ways is always a great thing, but without a team of people that support me and ensure that I get to and from the track and to and from School, it wouldn’t be possible.

“Without my Mum (Sue) and Dad (Paul) who put it all together and make it possible, John Walker and Trent Murray who prepare my karts and Toyota, along with the support of Regan Verwey from TAFE Queensland and Matt Payne from Acclaim Media who has pulled together our media program throughout the year, I wouldn’t have the success that I’ve been able to have.

“The team from the Toyota 86 Racing Series and Karting Australia have been solid all year.

“We have a small but super-supportive group of sponsors that ensure we can get on track each and every weekend including Tony Lenan from Exit Timeshare Now; the crew from Firestar Developments; along with George Kallinikos, Frank Mesiano; my brother Locky and his company Labrys; the team from Penrite Oil; Paul Morris from the Norwell Motorplex and the Paul Feeney Group.

“It hasn’t stopped for the season however. We’re heading towards the Aussie Driver Search final at Wakefield Park early in December and then the planning continues for next year over the summer and getting budgets together.

“We’re looking at several options, which may be swayed by the outcome of the Aussie Driver Search.”

Feeney’s season on-track has included becoming the youngest ever winner of the Toyota 86 Racing Series at 15-years-old, a further top three and top five finish, along with podiums and a top three Championship position in the SP Tools Australian Kart Championship.